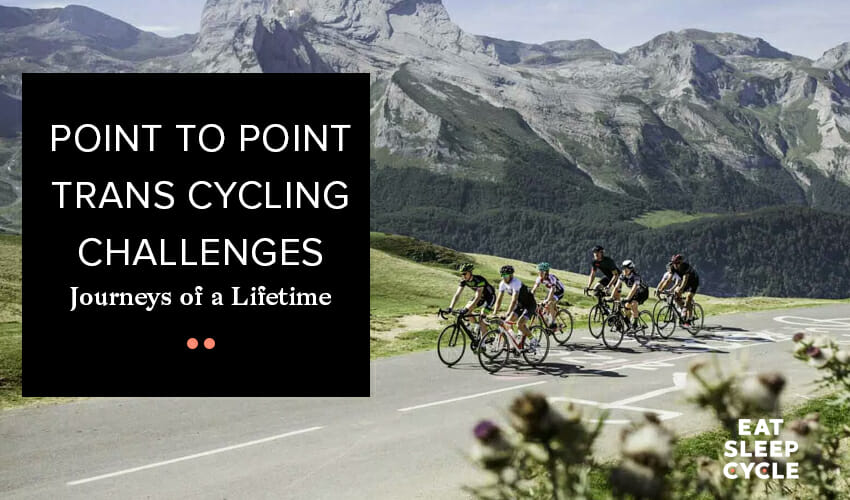 Point to Point Trans Cycling Challenges: Journeys of a Lifetime

What is a Trans Cycling Challenge?

A challenging point to point ride by bicycle from one place to another. Riding from point to point has a long history in cycling, indeed, it is the basis of most stage races. Usually this is designed to showcase two different towns with the start and finish locations having requested and paid to be in the spotlight. 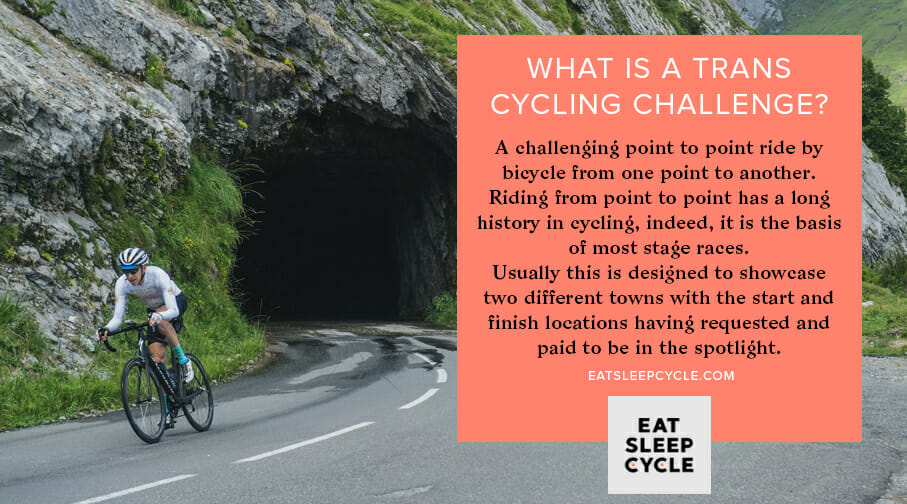 Can a Cycling Challenge make a Good Holiday?

But how do Trans Cycling Challenges translate to cycling vacations? There is a real sense of adventure in riding from A to B, using your bike to propel you from one place to another with an end goal in sight that is very different to simply riding loops out of one location. With the greater sense of adventure comes greater challenge and risk, and with that a huge sense of satisfaction from completing the journey.

Riding a point-to-point route means you get to see more, each day brings a new challenge, a new location, new scenery to enjoy from the saddle and new cuisine to enjoy post-ride, it is the ultimate way to get the most out of a cycling vacation. 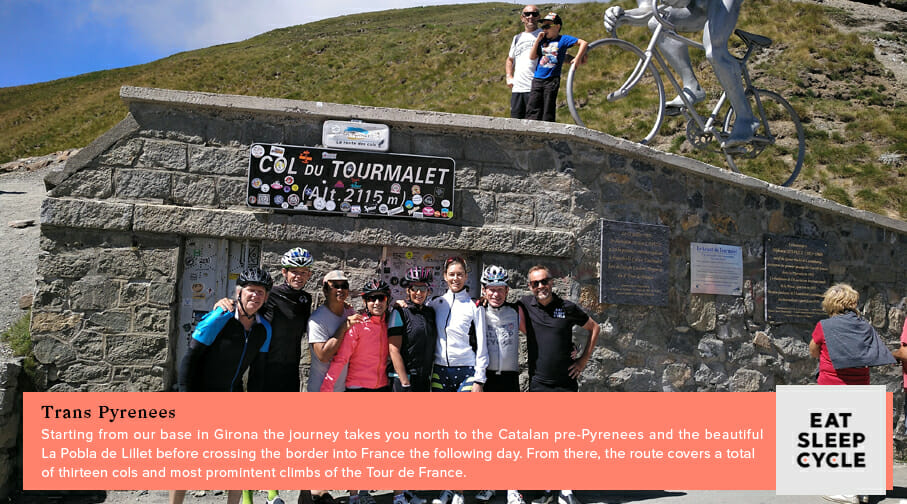 This is the original Trans Challenge. The first ever Eat Sleep Cycle Tour was a version of our current Trans Pyrenees tour (from Girona to Biarritz) and it remains one of our absolute favourite routes to ride.

Starting from our base in Girona the journey takes you north to the Catalan Pyrenees and the beautiful La Pobla de Lillet before crossing the border into France the following day. From there, the route covers a total of thirteen cols including some of the most prominent climbs of the Tour de France; the Col du Tourmalet, Col d’Aubisque, Col d’Aspin and more before reaching the final destination – the beautiful coastal city of San Sebastian.

The characteristics of the Pyrenees mean that the landscape is rugged and varied, making for spectacular views and stunning climbs and descents which then give way to the rolling roads of the Basque Country.

Looking for more of a Cycling Challenge?
The Raid Pyrenees is a 100 hour epic ride from the Atlantic to the Mediterranean via set check-points. 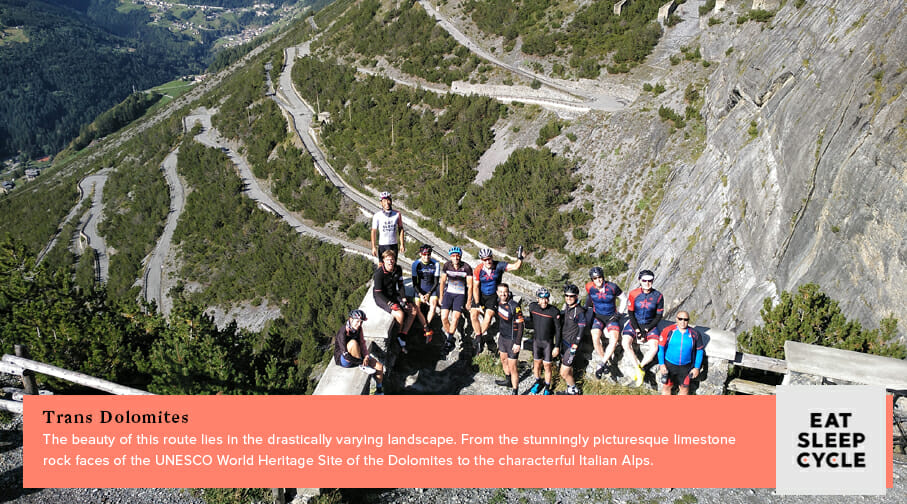 The Trans Dolomites Challenge traverses the Carnic Alps to the Italian Dolomites and across to the Italian Alps. Bookmarked by the mighty Monte Zoncolan and the legendary Passo Mortirolo and Passo Gavia with a whole host of renowned climbs of the Giro d’Italia and beautiful scenery in between it promises to test and excite in equal measure.

The beauty of this route lies in the drastically varying landscape. From the stunningly picturesque limestone rock faces of the UNESCO World Heritage Site of the Dolomites to the characterful Italian Alps that contrast with their polished French counterpart.

Meet our local Guide in the Italian Mountains

If you book a Trans Dolomites Tour then there is a good chance you’ll meet Mario, our local guide to the Italian mountains! 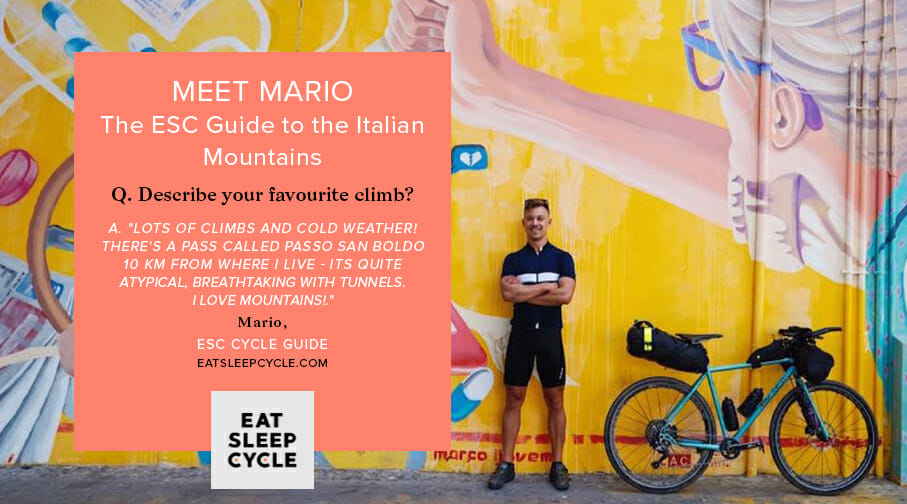 Where are you from?
Italy – a little town called Conegliano, 40 km from Venice

Where do you live?
In my hometown

What drew you to cycling and why?
I’ve always be passionate about the bicycle. I started working for the French brand Mavic & I had to start practicing riding to be able to give feedback on the apparel and products I was selling. Since then it became my biggest passion.

What’s your favourite thing about guiding?
That I made a job out of my passion and the fact that I can share my time with people who share my same passion – it comes pretty easy to me.

Describe your favourite climb?
Lots of climbs & cold weather! There’s a pass called Passo San Boldo 10 km from where I live – its quite atypical, breathtaking with tunnels. I love mountains!

Tell me about the best meal you’ve had in Italy
My Grandma’s – torn between risotto & sausage & potato – she was also from the mountains so its a typical dish.

What do you do when you’re not cycling?
In the winter when its too cold to cycle – I’ve been a cross-country skier since I was a kid so when I have a chance I head to the mountains. 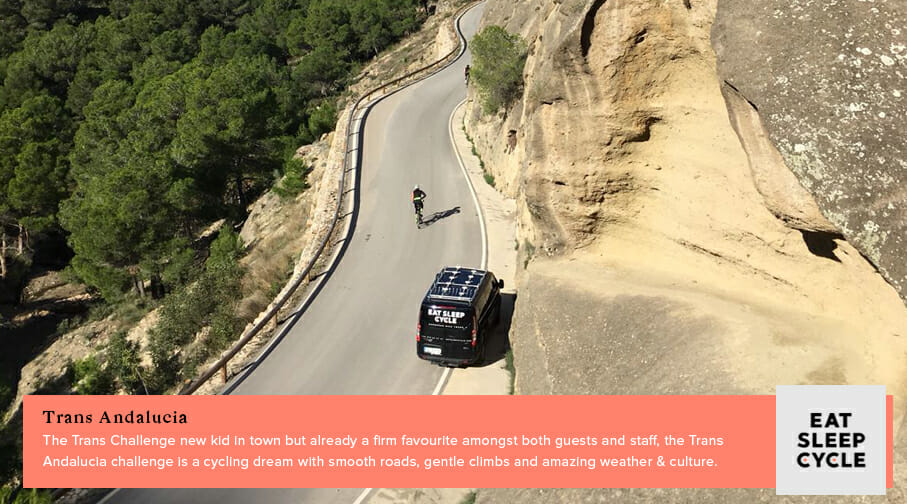 The Trans Challenge new kid in town but already a firm favourite amongst both guests and staff, the Trans Andalucia challenge is a cycling dream. We recently waxed lyrical on this blog on the beauty of cycling in Andalucia, the smooth roads, the gentle climbs, the weather and the culture together make it a paradise for a cycling holiday.

Starting from Almeria and heading west to Seville via the Sierra Nevada mountains, Granada, the ancient Moorish city of Antequera, Ronda & Arcos de la Frontera it is a tour filled with as much cultural interests as riding, not to mention the food!

Each of the Trans Cycling Challenges about will give a cycling experience like no other and all of our tours can be tailored to your needs. If you’d like to start the journey of a lifetime give us a call now on +34 972 649 131 or contact us online for more info! 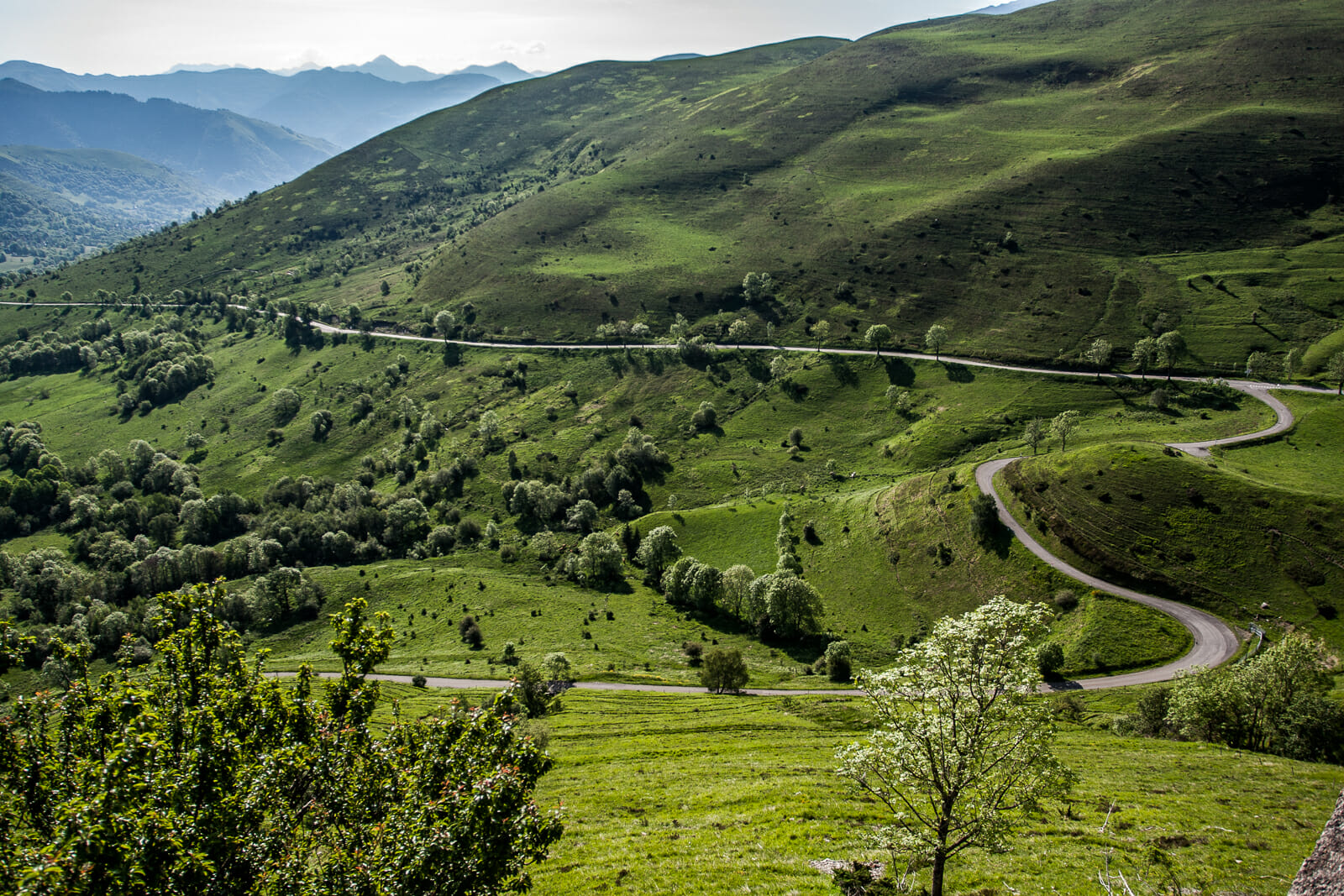 Cycling in the Pyrenees: Our Spiritual Home

By Brian Canty Pyrenees No Comments

Eat Sleep Cycle founder Brian recounts taking our first guests to the Pyrenees and attemps to explain just what’s so special about them.

To me, they’re the sport’s spiritual home and for us, the Pyrenees are where the Eat Sleep Cycle dream began.

It was a warm Saturday in October 2016 and we were strolling through the Old Town when we (of course) got stopped and called into a conversation ´Peter in the tattoo shop´was having with a long and lean Englishman named Paul.

Paul was friendly and polite and inquisitive and wondered about any rides going out the next day.

As it so happened, Lee and I had a spin planned with a friend named Paddy, so we invited Paul along. Little did we know what that would lead to.

Paul was in town a day early as two friends and his better half were on route from California for a trip in the Pyrenees.

They were time-pressed on it, had no real plan – only they had to be back in Girona by Thursday morning for another trip they were doing out of here. That was four days away…

So, in short, Lee and I decided to hijack their half-baked Pyrenees plans and come up with something, and QUICKLY!

We met the quartet of Jen, John, Julia and Paul in Vinil restaurant that Sunday night and following some last-minute research, we presented to them our Pyrenees adventure.

Less than a minute through our presentation John (partner of Julia) demanded ´stop, stop, stop´… “We´re in.”

So we were in: we were leaving for the Pyrenees the following morning and now all we had to do was arrange bikes, vehicles, transport, accommodation and routes. Easy.

Sunday night 11pm is few peoples idea of an ideal time to work, but fuelled by excitement and driven by a desire to deliver an amazing trip, we put some meat on the bones of a 3-night adventure.

We were going to tackle Superbagneres and the Peyreysourde, the Aspin and the Tourmalet. We were going to ride down the Allee de Etigny that bisects Luchon like Tour de France riders and feast like fat cats in L’Arbesquens and La Flamme Rouge.

We would lounge in the Etablissement Thermal Spa at the top of the town and shop for souvenirs around Avenue Carnot.

We’d fill our bellies at the breakfast table in the Alti and have the bikes spotless and hanging from the A-Frame out front when our quartet of riders came down each morning.

When I think of the Pyrenees, I think of Luchon and I think of all the riders who’ve come here to ride. If Lourdes is the pilgrimage for mass-goers, Luchon is the place where we of a different faith go.

It’s a place where bakeries and bike shops thrive, where roads fan outwards and upwards like the spokes of a wheel and if I could compare any French town to Girona, it would be Luchon.

In the same way arriving into GRO airport after being away for a while gives me that fuzzy, warm feeling, the D125 road to Luchon from the exit at Saint-Gaudens does likewise.

We’ve covered a lot of miles, literally and figuratively, in the interim with Eat Sleep Cycle but arriving into Luchon against the backdrop of a setting sun with the Pyrenees in the background that Monday in October 2016 is still one of the highlights of our short life with ESC.

The love affair has grown into a mutual thing and now we’re on first-name terms with many of the accommodation providers in town. We can call on the local Mavic dealer when we need a spoke or the owner of the aforementioned restaurant (he now has a second one) when we need a table outside.

From a time where we were politely refused a request for 8 take-away sandwiches, we can now order by Whatsapp at night and collect twice that number the following morning.

When the Eat Sleep Cycle van trundles into town with bikes and bags and trailers all kinds of accessories, we’re greeted with a ‘welcome back’ by the staff who come outside to greet us.

It’s a gateway town to a cyclist’s playground with many of the biggest climbs in professional cycling accessible from here. It’s always a pleasure to head to the mountains for the next adventure.

Inspired? Check out our Pyrenees Cycling Tours and join us for a ride!