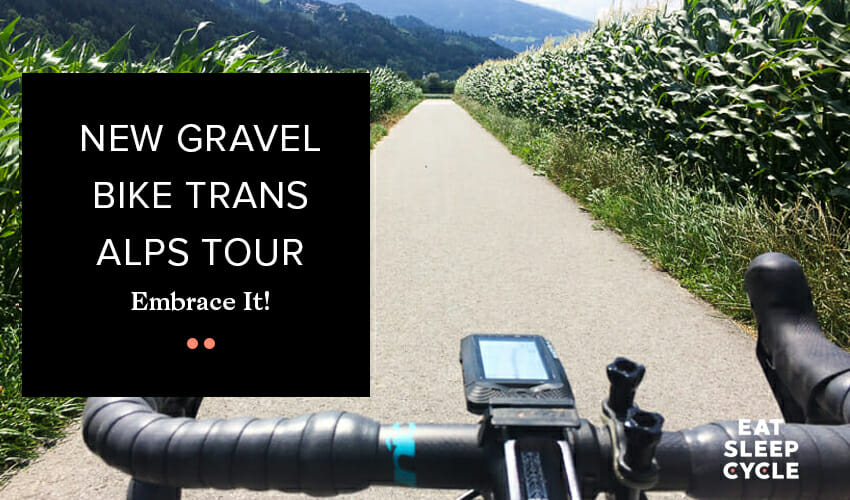 This is an incredible new itinerary rolling out in July 2019 linking Munich in the north to Verona in the south, via the cities of Innsbruck (host to the 2018 Cycling World Championships), Bolzano & Trento and straddling the Alps. Designed & tested by Joan Calvera Porta of CycloCat the route links bike paths & gravel roads on a journey through changing landscapes and spectacular scenery.

The gravel bike Trans Alps Tour starts in Munich, the capital of Bavaria. Located to the north of the Bavarian Alps & on the banks of the River Isar the city makes a grand start to the ride. Spin south towards the mountains through woodland, trails & traffic free roads. The River Isar runs from Munich with our path to Bad Tolz, the first stop on the route. Bad Tolz is the gateway to the Alps! 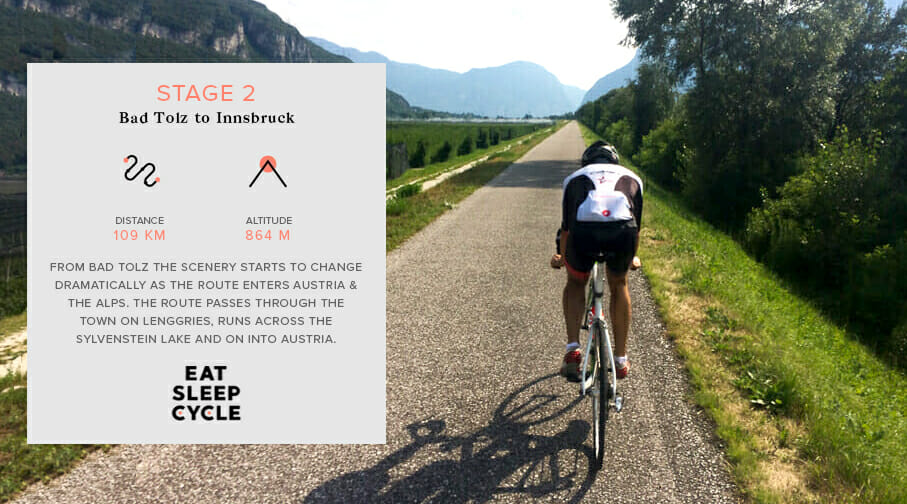 From Bad Tolz the scenery starts to change dramatically as the route enters Austria & the Alps. The route passes through the town on Lenggries, runs across the Sylvenstein Lake and on into Austria. The road reaches 1,000 m altitude at the town of Maurach before a steep descent meets the River Eno, which carves a flat route to Innsbruck. 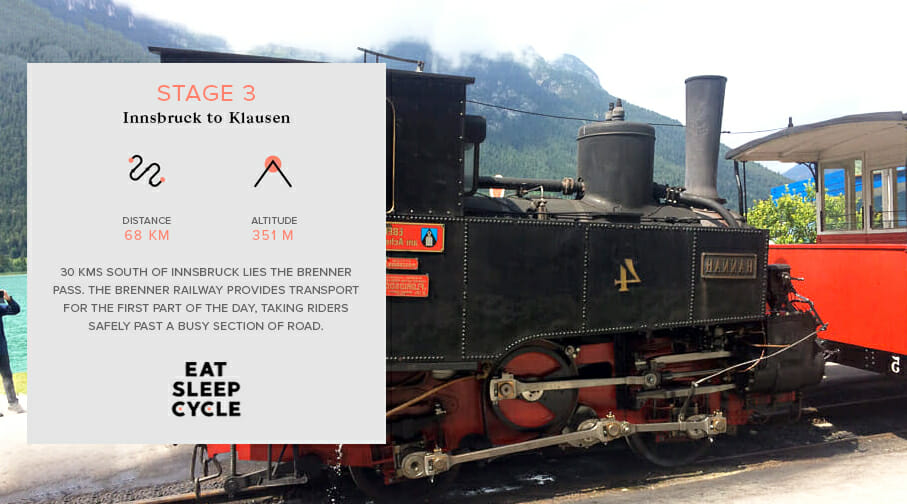 30 kms south of Innsbruck lies the Brenner pass. The Brenner Railway provides transport for the first part of the day, taking riders safely past a busy section of road. Brenner station is at 1,371 m altitude – the highest point reached on the Italian & Austrian rail networks. At the pass is the Italian border & the gravel road begins again with a glorious descent through Italy.

Drop through Colle Isarco & a myriad of Italian villages to our resting place in Klausen, conveniently located at the base of the route to the Italian Dolomites.

It was impossible to resist adding a day to explore the iconic Sella Ronda route away from the usual holiday traffic. Our route combines sections of the classic road route with off-road sections which provide a unique and gorgeous perspective on this well-ridden route. It’s today that riders need their climbing legs with altitudes reaching over 2,200 m.

After a day in the Dolomites it’s time to head south again, this time to the Italian city of Trento. The route follows the gently descending valley through Bolzano, the capital of South Tyrol. Bolzano is considered as a bridge between the North and South due to the three spoken languages in South Tyrol – Italian, German, and Ladin, and the confluence of Italian and German-Austrian culture. 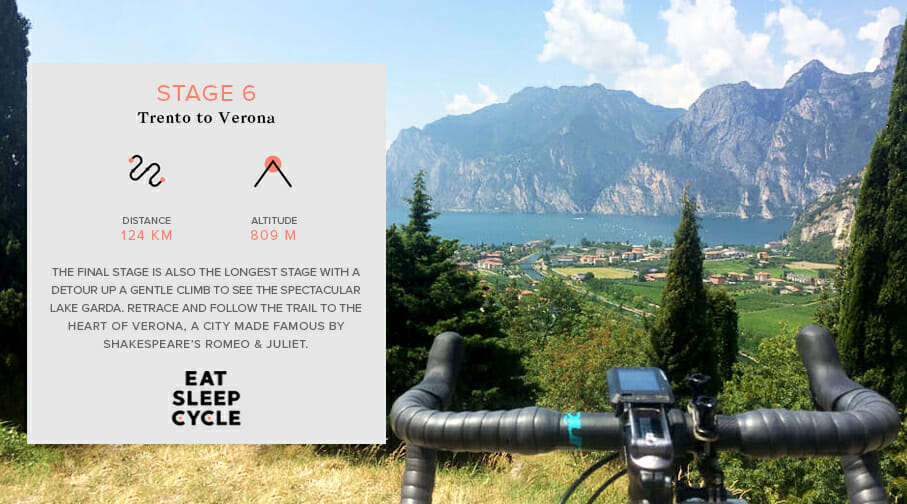 The final stage is also the longest stage. Continue south on a flat trail through the town of Rovereto. Detour up a gentle climb to see the spectacular Lake Garda. Retrace and follow the trail to the heart of Verona, a city made famous by Shakespeare’s Romeo & Juliet. 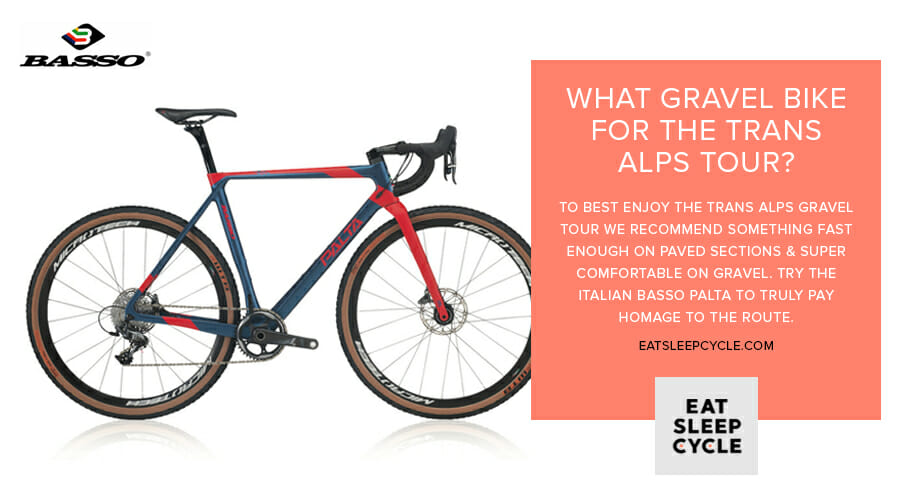 What Gravel Bike For The Trans Alps Tour?

To best enjoy the Trans Alps gravel tour we recommend a gravel bike (no surprises there!) – something fast enough on paved sections & super comfortable on gravel. Try the Italian Basso Palta to truly pay homage to the route.

We’re really excited about this new tour of the Trans Alps on gravel bikes and the interest we’re receiving about this tour is phenomenal but what’s not to love about it? Gravel, bikes and the Alps – perfect! If you’re interested in securing a place on the tour then give us a call now on +34 972 649 131 or contact us online for more info.