The brand new, custom painted Ridley Helium SLX had been sat staring at me for 3-weeks. I’m a bit funny with riding a new bike without a proper fitting session and I simply hadn’t had time. But when Tiesj Benoot won Strade Bianche on it, I dropped everything, put on the nearest cycling clothes (lucky for you no photos of that catastrophe) and headed out into the Girona sunshine.

A new bike normally feels strange on the first ride. Especially because this time, I decided to trial a new saddle. I’ve had some numbness troubles downstairs and determined to fix that, will test the Eat Sleep Cycle Fizik saddle fitting programme (Test any saddle before buying). I am starting with the Antares which is wider than my previous Arione. Idea being the sit bones rest on it rather than that important nerve which eventually causes numbness. For the first few rides, the sit bones hurt a bit, but that’s a sign of a good position.

In addition, this was the first time I’d used Rotor cranks. Since they are manufactured in Madrid it seemed fitting to have them on our rental and race bike fleet. I know, you can’t fault Shimano, but I wanted to give it a go. I’m not sure if it’s the shape of the Rotor cranks or if they genuinely are better but they felt good from the offset.

Other upgrades on the bike include the legendary Fatboys, the creation of Drew Gill at Spin On These (http://ridefullgas.com/). I could write a blog just on these wheels which have broken the age-old idea of narrow tyres and high pressure. The opposite results in more comfort, more grip and a better looking bike! Finished with the new Ultegra shifters, brakes and derailleurs, what is left is a very light and attractive looking bike.

From the off-set the bike felt stable, if not a little high at the front. The Helium has a reasonably large stack and I´m used to riding slammed race bikes. Due to a combination of back problems and more riding in the high mountains, I’m open to giving a higher front end a go.

Instantly I noted great responsiveness when accelerating to beat the red lights out of town. The bike felt super stiff. Once into the countryside things started to speed up and in the aero position, I was pushing 50 km/hr easily. A great start!

It was the first climb that signed and sealed my decision to ride the Helium this year. As the bike is the race choice of our sponsored race team “Rocacorba Racing” it only seemed fit for that climb to be Rocacorba. At nearly 1,000 meters it’s tough, with gradients of over 14% in places.

As soon as the slope steepened the bike just seemed to ride away from me, begging to be ridden faster, jump out the saddle on the bends instead of cruising around and keep the pace up all the way to the top. Wow, the bike is light and yes I noticed a big difference from last year’s race bike (a Guerciotti).

Chatting to several other professional riders in Girona who also ride the Helium, we´ve heard plenty of stories of the bike being under the legal limit of 7 Kg. But us amateurs don´t need to worry about that and every gram in our favor is potentially more kudos!

All that was left was the ride down and a combination of the Fatboys and bike stiffness made that very enjoyable. The slightly higher stack was not detrimental to the descent.

Last and not least, the bike looks great. Ridley´s custom paint jobs are top notch, with a full colour palette and several designs to choose from. I went for a stealth look, with a touch of Rocacorba Racing blue, but below you’ll see just how adventurous you can be with it… 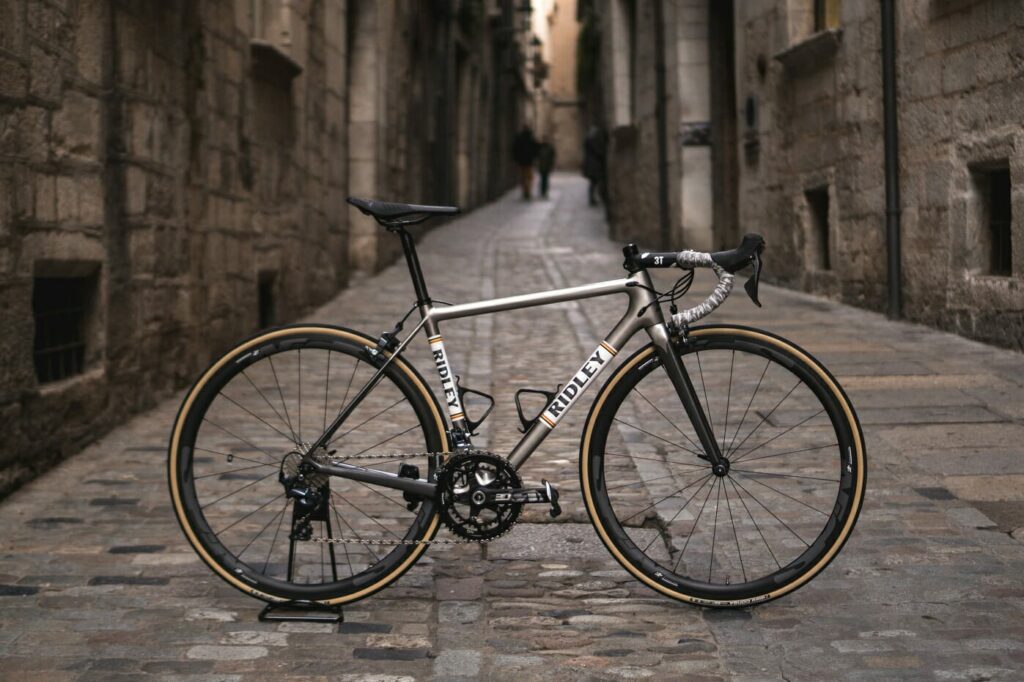