Paddy Bevin Tour Diary: “I will cherish it for the rest of my life” 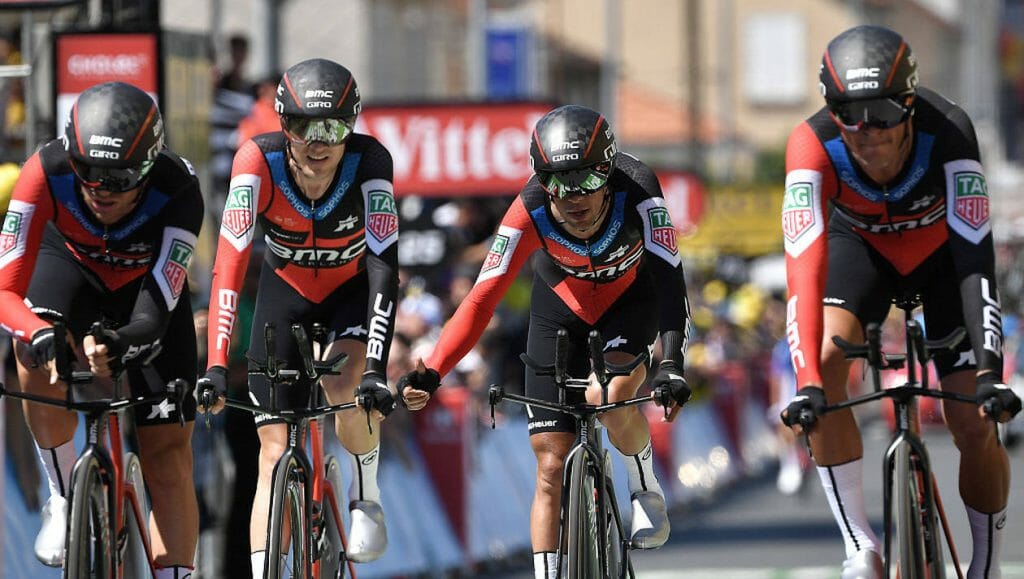 Yesterday was one of the best days I’ve ever enjoyed as a bike rider and I will cherish it for the rest of my life.

I was part of a stage-winning team in the biggest bike race in the world and it came about by sheer hard work, effort and execution of a plan we’d hatched months ago.

To win a team time-trial at the Tour de France is an amazing feat and one that very few riders ever get to put on their CV.

For some riders, it may be the only chance they ever get to stand on the winning podium and if it never happens me in my career again I’ll always remember the town of Cholet and July 9th, 2018.

Okay, we were one of the favourites for the test yesterday that started and finished in Cholet; we have the best bikes in the peloton, a highly-motivated group and the course was good for us too.

But the margins at this level are tiny and one wrong corner or mistimed pull on the front can really upset your rhythm and see you slip down the standings.

We had the morning to recce the course because our start time wasn’t until 3.30, so we used this time wisely.

We drove around yesterday morning so we could get a feel for it with the crowds gathered. We also rode around it and our coach Marco Pinotti was advising us on where we could go full gas and where would be better to back it off a little.

In actual fact, we rode the course last Wednesday as well when there was no traffic. We all flew in the night before, so this was no accident what happened yesterday. That line about working harder and getting luckier springs to mind…

Marco’s experience was just one another part of the jigsaw, the rest was up to us as a team to decide who’d pull and when.

The rule in this year’s Tour is your finishing time (on a team time-trial) is dictated by the time of your fourth rider crossing the line, meaning we could ‘sacrifice’ four riders if necessary.

By this, we can effectively ‘select’ who would go off hard and who would be ‘spared’ until the latter part of the test.

We knew Michael (Schar) would be dropped but to his immense credit, he emptied himself early on and did some pulls that had me on the ropes.

Now, as it turned out, we finished with five men coming across the line which not only shows how strong we were yesterday, but it also showed an element of caution/maturity because we could allow for a puncture or mechanical.

In other words, had we been down to four riders for the final 10 kilometres and one of them lost contact, the rest of us would have to wait and we wouldn’t have won.

Our winning margin yesterday, by the way, was just four seconds….over 35.5 kilometres. We clocked 38” and 46 seconds at an average speed of 54.9 kilometres an hour.

That’s quite something and a result I am very proud of, considering the wind, the roundabouts and the hills.

We completely deserved that win. Keung was unbelievable yesterday and Greg too. It was just brilliant to see him pull on the yellow jersey after such a long wait in the hotseat.

On that note, I’ve been in that hotseat before for long afternoons counting the riders in.

Primoz Roglic dumped me out of it on the final stage of Pais Vasco, as did my teammate Tejay in California and it’s a sick feeling when you lose it so late.

But not yesterday. After the rush of hugs and high fives and handshakes we got a group photo behind the podium and it’s a moment I’ll cherish dearly as long as I live.

There is something about nailing a time-trial with a team. It brings us closer together and as we head into stage four today, we know we are a closer unit.

Speaking of today, we have another day for the sprinters.

We all know how things can turn around in one second, even on these flat stages, so we’ll have to be completely focused on getting to the finish line safely and protecting Richie as much as possible.

He’s still 51 seconds behind Geraint Thomas, the best placed GC contender, so there’s no gap to lose time on this terrain anymore.

Today we’ll start at La Baule, in the Breton area, and we’ll cover 195 kilometres on rolling terrain to finish in Sarzeau.

It’s not a hilly stage compared to what we’ve ahead, but it’s not a pan flat day.

Even a classified climb (4th category) will come at 135,5 kms. Nothing hard or long, but those looking to wear the the polka dot jersey on at least one stage might want to give it a little squeeze there.

I expect a sprint finish and unlike the second stage, the last kilometres are held on a wide and long avenue (I’ve been told, is one of the longest straight lines in French cycling).

Anyway, sprinters should be aware that as per the roadbook, the terrain has a slight uphill with 2 kms left.

Launching all the power too soon could ruin some expectations to wear green this afternoon.

Let’s just hope they can make it all to the line together and give the public a textbook finish.