The Pirinexus 360 – A Different Side of Catalunya 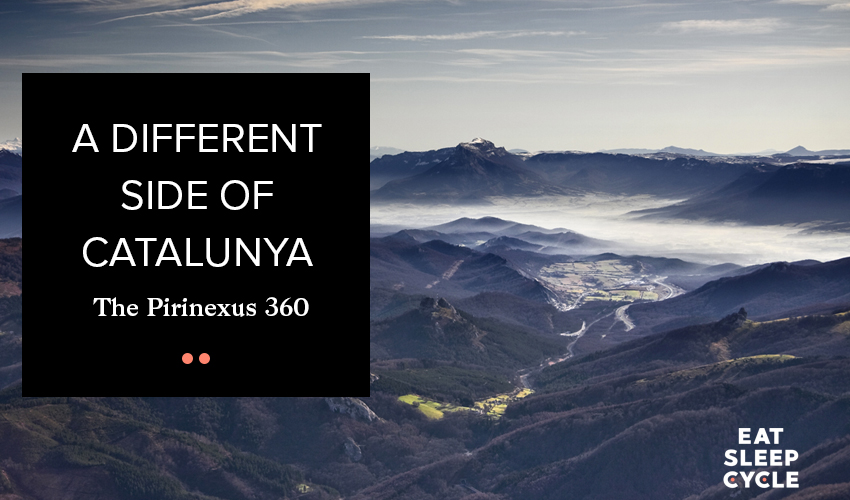 Catalunya is well known for its road cycling pedigree by now, the droves of riders that frequent the roads around Girona are testament to that. But if you’re after a different way to explore the region then look no further than the Pirinexus 360. As the name suggests the route is a circular 360 km loop. From Girona, it heads north to Olot, Camprodon & France via the Pyrenees Mountains, before heading south and downhill to the Costa Brava, and looping back around to Girona. The route can be completed in either one monster chunk for the epic riders out there, or in smaller more leisurely rides taking in the beautiful towns and villages along the way.

The Pirinexus route is divided into 7 stretches of distances between 22 and 73km and is designed to be completed in small segments in order to take advantage of the beautiful surroundings and tranquillity of the off-road riding. The well-signposted route crosses through some of the most beautiful landscapes and charming villages Catalunya has to offer including the coastline of the Costa Brava and charming towns in the south of France.

Starting from Girona the route is best completed at a leisurely pace over 5 – 8 days to take full advantage of the varied and richly cultured towns and villages interposed throughout. So let’s break down the Pirinexus 360 route!

The first section is a 57 km stretch that sees you head north-west from Girona to the town of Olot, passing through three ‘comarcas’ and 12 towns and taking in the valleys of the Rivers Fluvià, Brugent and Ter. The first ‘comarca’ is Girones, heading out of the city towards the industrial towns of Salt and Bescanó and Bonmatí to the town of Anglès, which is home to a walled medieval town. The medieval town of Amer is the final town in the Girones comarca before the route enters the ‘Zona Volcanica de la Garrotxa’ of which Olot is the capital, an area of astonishing natural beauty and geological interest. As you pass through Sant Feliu de Pallerols you will be able to spot volcanic rocks parallel to the route. From here both the natural and man-made spectacles are in abundance, from a 9th century castle, to natural springs and gorges, sprawling valleys and beautiful churches. 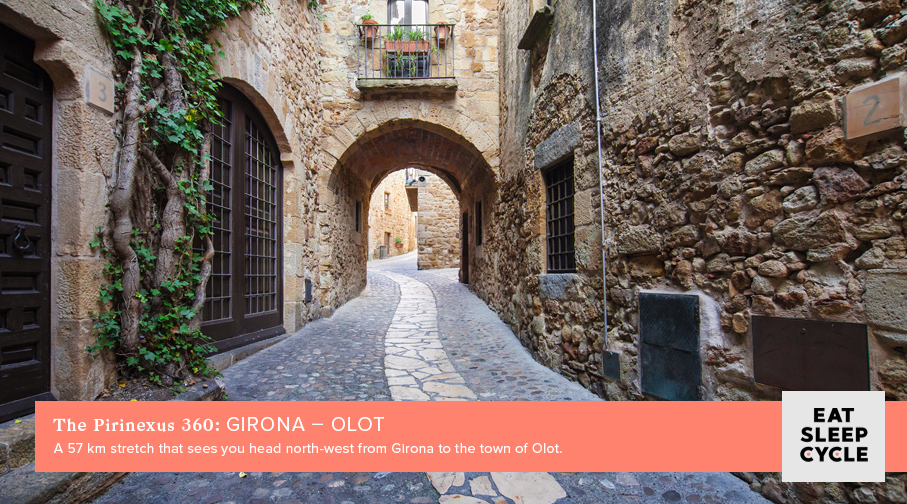 The shortness of this section of the Pirinexus 360 belies its difficulty, it is the hilliest section of the route with 900m of elevation but it is possibly the most beautiful.

From Olot the climbing begins straight away with the Coll de Coubet, a steady climb of around 9km, at the top the road plateaus to reveal fantastic views of the Pyrenees. From there the route takes a right along the rolling road to the Coll de Santigosa and beautiful comarca of El Ripollès. The route follows the road until the 12th Century Romanesque Church of Sant Pol and then crosses the Gothic bridge into Sant Joan Les Abadeses. From St Joan the tranquil lanes traverse the valley until Camprodon, a picture-postcard town populated mainly by the moneyed Barcelona second home owners and the 12th century Pont Nou bridge. Also home to the Birba biscuit factory, whose produce can be found in most shops in the area. 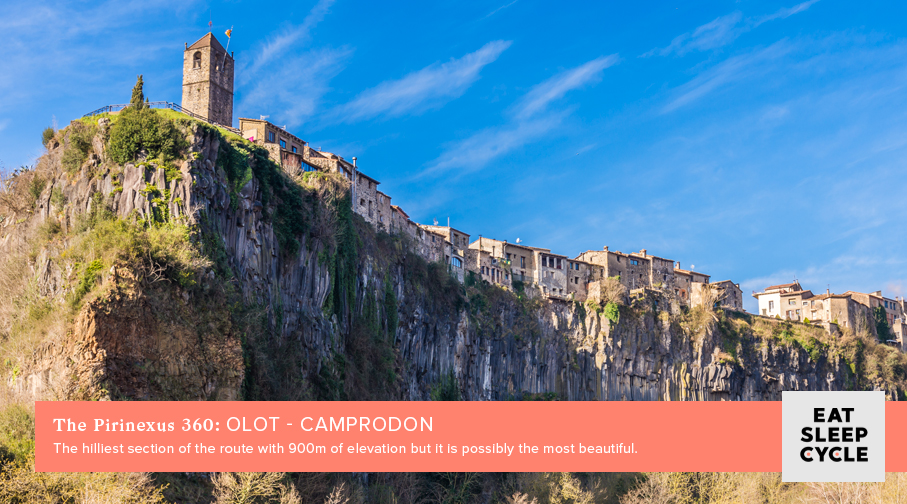 It is on this section of the route that you will enter France for the first time. Leaving Camprodon, the juxtaposition of the contrasting cultures of medieval Catalunya and the low Pyrenees become apparent. The area is steeped in history with and a wealth of cultures and cuisines to sample. The views from the Coll d’Ares, which marks the border between Spain and France, are breath-taking and stopping to savour them before crossing into France is essential.

Ceret itself is known as the cherry capital and is also widely considered the home of the Cubism art movement so for art lovers a visit to the Museum of Modern art is a must.

From Ceret the next point of interest is the communce of Le Boulou, where various remains of the old part of the village can be seen including an magnificent 832kg bell-tower, the ornately decorated Eglise Sainte-Marie and the statue ‘du petit tambour’ or little drummer boy which depicts the child mortally wounded in battle. Indeed this entire section of the route is peppered with plenty of historical interest and medieval, historical remains. The area is also known for having been at the forefront of the cork industry throughout the 20th century. Crossing the Coll de Panissars and back into Spain through La Jonquera, a town of dual interest as both a commercial and cultural centre the route eventually reaches Capmany – an integral location within the wine-making trade home to an array of cellars producing D.O Empordà wine.

Tasting Empordà wine is a must in this area, there are plenty of producers, many of whom offer tours of their vineyards and cellars with tastings. Following the river Llobregat from Capmany comes the town of Peralada which is steeped in history home to the ancient walled settlement of Ibers as well as a castle museum. A short detour from the route on this section of Pirinexus is Figueres a town perhaps most famous for being home to the Salvador Dalí museum dedicated to the surrealist painter who resided in the down. Those interested in nature will enjoy the Aiguamolls Natural Park which is home to an array of local bird life. Crossing the wooden bridge over the River Muga you will reach the coast and Empuriabrava, the largest residential marina in Europe. Following the coast down you will then reach the fishing town of L’Escala famous for its anchovies. Stop just north of the town for a luxurious evening by the Mediterranean. 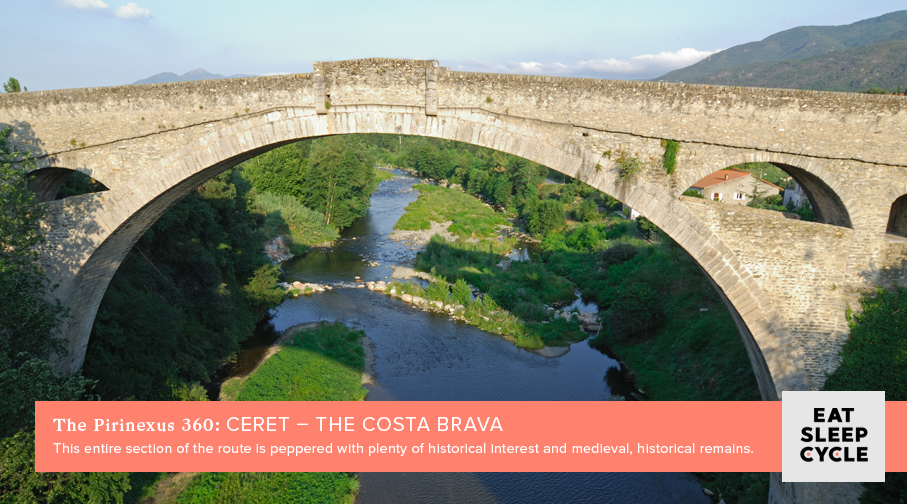 A large section of this segment runs parallel with the coast taking in the many towns of the Baix or ‘low’ Empordà region including Pals, where yet more medieval remains can be seen. Following on from Torrent is the area of the Gavarres Massif bordered by Palafrugell, a picturesque town characterised by an unfinished bell tower and the Modernist Tower of Can Mario, an old factory which has been converted into the Museum of Contemporary Sculpture. The coastal section comes to an end at the fishng town of Sant Feliu de Guixols, the route then heads north-west and is scattered with towns containing myriad medieval structures and remains before finally re-entering the Girones commarca. Through the corkwood forest comes the town of Lllagostera before crossing the fault lines which created the hot springs that are dotted in the area into Casa de la Selva. From the cork region comes the ceramic region and the town of Quart where a pottery museum can be accessed straight from the Via Verde before heading back to Girona. 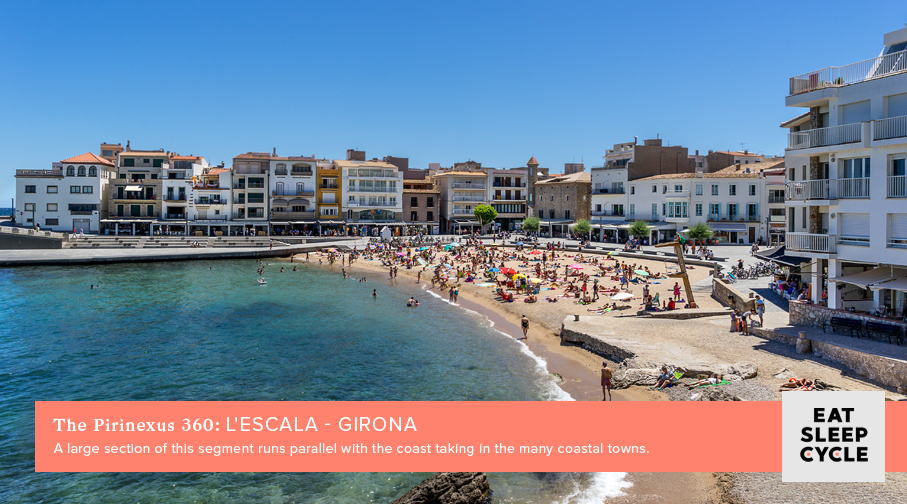 The Pirinexus route provides a fantastic vehicle by which to view an area rich in culture and history from the tranquillity of cycling-specific infrastructure free from traffic. Cycling the Pirinexus allows for a thorough exploration of the area which the road does not always provide and the accessibility of the roads and trails means that it can be enjoyed by riders of all abilities.

There are a myriad of ways to tailor your cycling tour of the Pirinexus like: 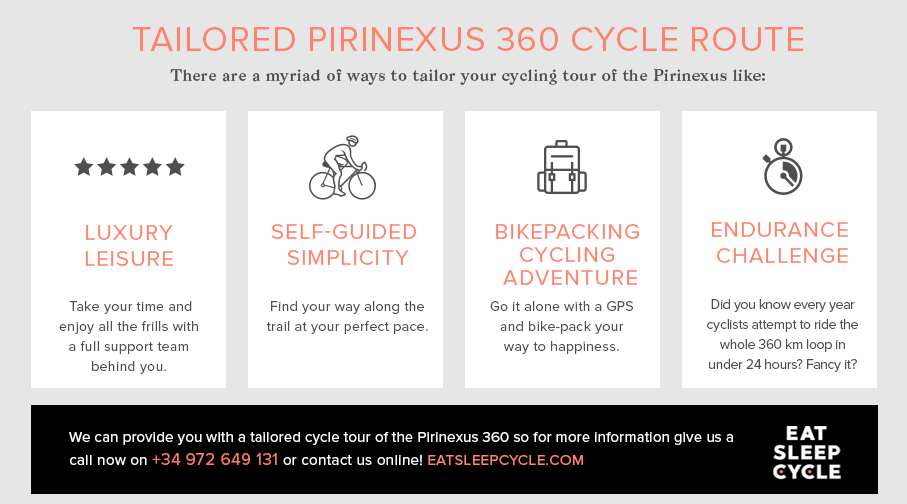 If you think that riding the Pirinexus route sounds like something you would like to take on then make sure to give us a call on +34 972 649 131 or contact us online for more info! We’re now accepting bookings for next season so make sure you secure your saddle now!