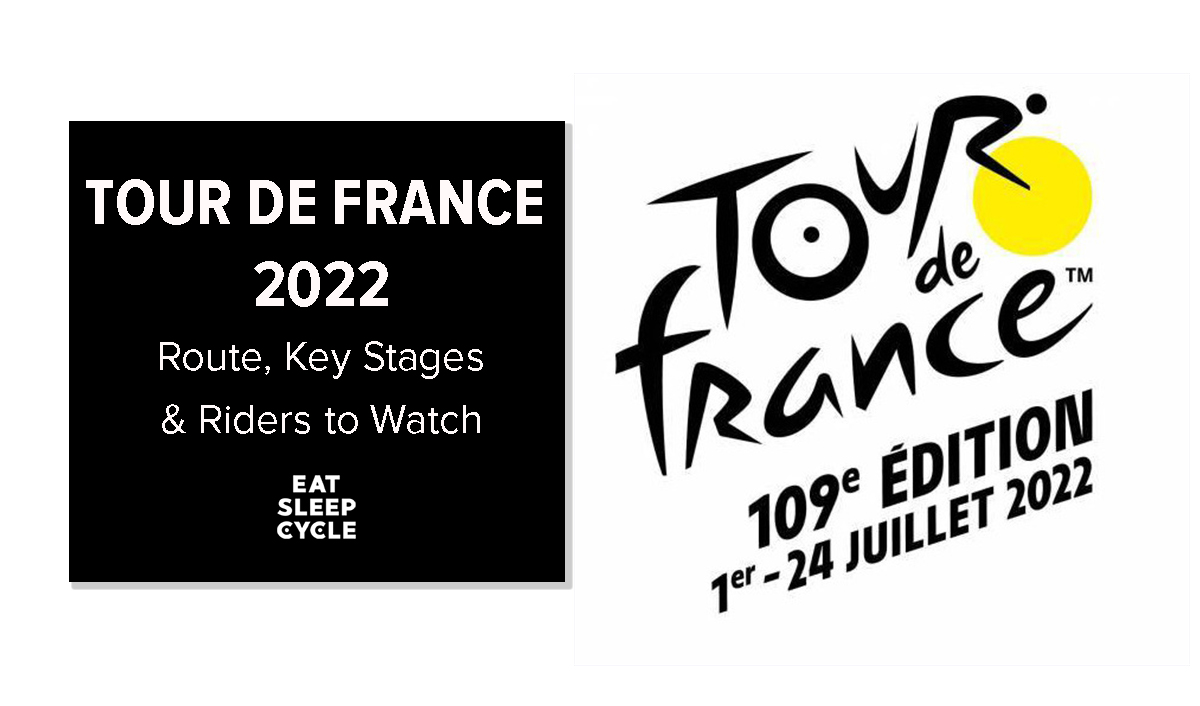 As the summer sweeps in, we know what is coming… the TOUR!  The biggest race in the world, the three week epic journey around France, the race of history, glory, and defeat, from the cobbles of the north to the highest pyrenees in the south, and of course a breathtaking final lap around Paris- loving cycling means you love the Tour.  And what is better than it being on our doorstep…

The 2022 Tour de France Grand Depart starts in Copenhagen, the gorgeous Scandinavian capital  of in Denmark. An individual time trial kicks off the three weeks – so the GC competition will begin from the gun.  In these early stages of the general classification battles, some will survive, and we might not have a winner but even in these early days, expect some to suffer losses they can’t bring back. Expect to see Tadej Pogačar and Primož Roglič putting in fierce fights these first days, against the time trial specialists like Ganna and Dennis.

As we depart the ‘Depart’ the race sails on from Denmark swiftly to Northern France, for a little taste of the cobbles of Paris Roubaix, deep in the trenches of the Arenberg Forest. Whereas Paris Roubaix, the one day classic is fought by the harder, bigger riders, when it’s part of the Tour, the general classification battle lives on and our lightweight climbers will have to fight to stay in the race that day, on terrain foreign to many of their likings.

Of course, the first week is chock full of sprint stages, where we are likely to see Wout Van Aert and Mathieu Van Der Poel continue their lively rivalry for the green jersey (points classification.) But it’s not just winning sprints that wins that jersey- it’s intermediate time bonuses, and surviving the three weeks til Paris.  The dreamers dare and the darers dream when it comes to this jersey, and often as it’s said, fortune favours the bold.  The likes of Michael Matthews and Fabio Jakobsen could put a damper on the “vans duo” aspirations… 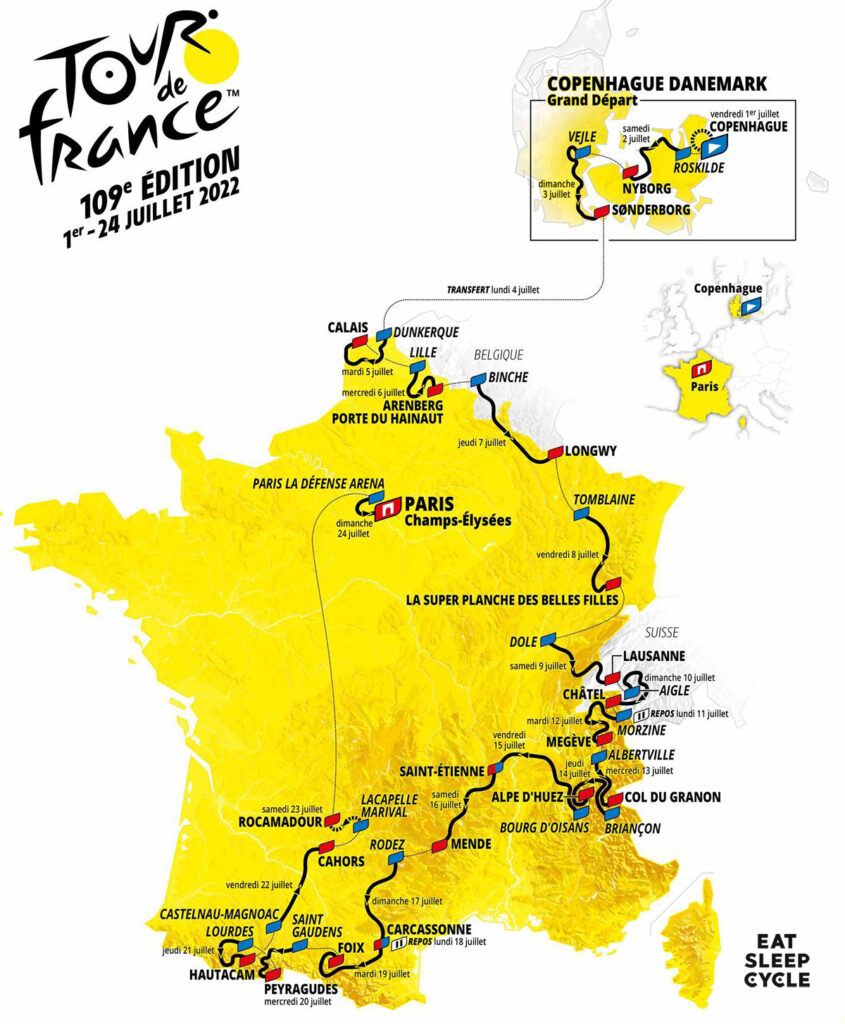 The Tour de France in the French Alps

And of course, as week two comes in, the race moves forward into the Alps. The Télégraphe and  Galibier and a summit finish on Alpe d’Huez stand out as spectacular places to watch, whether on TV or in person. For a lesser known summit, watch out for the decisive 2,413-metre Col du Granon on stage 11. As the general classification rolls on, the climbers will blossom here, and the Polka Dot (climbers) jersey competition will begin to be contested.  Will the breakaways win?  Will the loyal lieutenants take their chance at glory?  The second week of the Tour is often more unpredictable than the third- when the GC riders are more focused on not losing than winning, and the French riders fight furiously for victory on Bastille day.

Want to climb the Classic Cols of the Alps? Join one of our two Alps tours this summer!

Speaking of that Polka Dot jersey, will it be a year for the French riders as it so often is?  This jersey seems to hold a special place in the hearts of the countrymen, and it could be a showdown, Bardet vs. Barguil, Gaudu vs Martin.

The Tour de France in the High Mountains – the Pyrenees

Into the third week the race heads south west to the Pyrenees. Often overlooked for the Alps, The Pyrenees are the real testing grounds for the race this year.  For a day of experiencing tour atmosphere check out the festivities of the rest day in the fortress city of Carcassone.  The mountains in the Pyrenees come thick and fast.  On Stage 17, all in the second half of the 130 k stage the weary riders will take on the Col d’Aspin  the Hourquette d’Ancizan, and the Col d’Azet. Think that’s enough?  Well, not for the race organisers.  One more kick finishes the day on the  climb to Peyragudes altiport. If that wasn’t enough, the next day brings the same intensity. The final mountain stage of the race takes on the legendary Hautacam.  From the city of Lourdes, and with the  Col d’Aubisque and and the Col de Spandelles between the final brutal climb, this is one of the last true days to win the Tour. Who will be left standing after?

See the action live: Ride with us on our Tour de France Pyrenees tour & spectate Stage 16 & 17.

And as the dust settles on the mountains, only an individual time trial and a flat stage stand between the peloton and Paris.  As the last Sunday light rolls in, the remaining contenders will put in their final fight, as they circle around the Arc de Triomphe, yet only one with be triumphant.

Riders to watch out for in the 2022 Tour de France

Tadej Pogačar: Nothing like going in wearing number one… two wins in a row puts a lot of weight on the young Slovenians’ shoulders

Primož Roglič: Another Slovenian, this one with something to prove, and incredibly strong team behind him, Rog will have general classification in his crosshairs

Sepp Kuss: Riding in support of his team leader above, the talented American will still take his chances and dare to go for glory from breakaways, or reel back in danger for the good of the team.

Richard Carapaz: Fresh off an Olympic win and a podium finish at last year’s tour, the Ineos rider from Ecuador will be tearing up the mountain stages.

Matej Mohorič: Winner of Milan Samremo this year, add Matej to the growing number of Slovenian riders on this list. He’s unstoppable on descents and isn’t scared to go all in.

David Gaudu: An exciting French rider who could be a throw up for a great general classification or a stage win, or of course, the climbers jersey.

Jonas Vingegaard: Second last year, the young Danish rider will still be supporting Rog this year but will bring some fireworks of his own.

Wout Van Aert: Mountains, Time Trials and Sprints, the Belgian rider can win on all terrains.

Mathieu Van der Poel: Another unstoppable powerhouse- watching MvdP race is nothing if not fun.

Michael Matthews: The Australian will take his chances on the green jersey and possibly try for wins from a breakaway.

Thomas De Gendt: No one, no one bosses a breakaway like TdG.

Mark Cavendish: (We are all hoping he is there.  No description needed.)

Want to experience the atmosphere of the Tour de France?

Every year we head to the Pyrenees to watch the race as it hits the high mountains – you’re invited! Plus, standby for our next blog profiling the Womens’s Tour de France.