The 2019 Vuelta a España: Route Preview

The Vuelta a España, the final grand tour of the 2019 cycling season, is nearly upon us. As our base is in Spain here at Eat Sleep Cycle we regard the Vuelta as our ‘home’ grand tour and last year we wrote about 10 reasons why we think the Vuelta is better than The Tour. Sure, we’re biased, but we think Spain is a unique and varied country which everyone should explore on two wheels and which also makes for some thrilling bike racing!

2019 marks the 74th edition of the youngest grand tour and the riders will take on 3,272.2km of racing across 21 stages beginning with a team time trial which will take place in Alicante on 24th August. This year’s Vuelta a España also includes an individual time trial and eight uphill stage finishes of which five are new.

In a deviation from the script of the last few years, largely thanks to the absence of two of the biggest contenders, the Tour de France turned into an exciting battle for the yellow jersey. The Vuelta looks to be no different and sees the return of Giro d’Italia winner Richard Carapaz to racing across three weeks. Mitchelton-Scott have announced the absence of both Yates brothers instead opting to support Esteban Chaves. Fresh off the Tour de France Podium, Dutchman Steven Kruijswijk will also be starting alongside teammate Primož Roglič who placed third in the Giro. Astana’s Miguel Angel Lopez will also be one to watch.

Stage 2: Benidorm to Calpe
Stage 2 is where the race begins in earnest following the opening TTT stage. The biggest challenge for the riders on this stage is the steep climb of Alto de Puig Llorença to Cumbre del Sol.

Stage 9: Andorra
Stage 9 is a short but gruelling outing into Andorra, only 95km in length but featuring a leg-destroying five categorised climbs which anyone who has ridden the La Purito Challenge will recognise!

Stage 11: France to Basque Country
Stage 11 sees the race begin in France before venturing back into Spain and the rolling terrain of the Basque country. The stage is likely to suit a breakaway as GC leaders conserve energy after the previous days’ time trial and ahead of the mountains.

Stage 12 & 13: Basque Country
Staying in the Basque country, stage 12 from Circuito de Navarra to Bilbao is characteristic of the up-and-down nature of the region’s roads with three climbs in the final 40km before a fast descent into Bilbao. Stage 13 is one of the toughest in the race with 7 categorised climbs including a tough summit finish to Alto de Los Machuchos.

Stage 20
If the GC is still to play for at this point then the penultimate day could be a spicy one. Five mountain passes stand between the riders and Madrid although the hardest of them, Puerto de Pena Negra, is potentially too far out and the finish is potentially not challenging enough to cause too much upset. 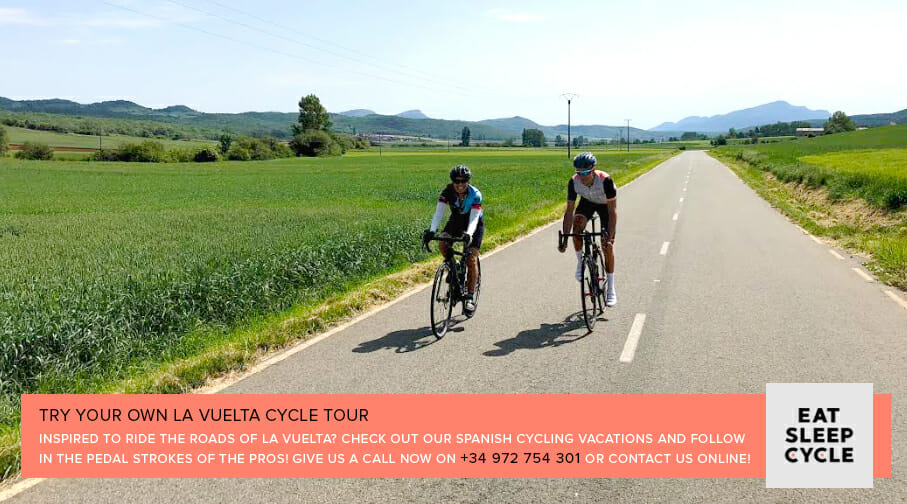 Inspired to ride the roads of La Vuelta? Check out our Spanish Cycling Vacations and follow in the pedal strokes of the pros! Give us a call now on +34 972 754 301 or contact us online!