Girona in ‘winter’ and the season of base miles

I absolutely love this time of year 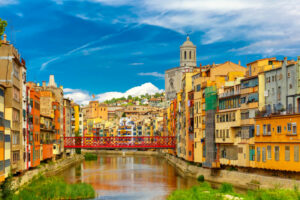 in Girona; the tourists have moved on, the light at sunset is magical and the markets are exploding with colour and flavour.  We are still riding with our arms and legs out and some of the Eat Sleep Cycle team are actually improving their tan lines! But then again it is still Autumn and we are normally blessed with warm temperatures right through December with Girona’s short Winter starting in January and lasting until the end of February.

For racing and leisure cyclists, the start of November is typically the time when some form of structured training is recommenced after an October break. At Eat Sleep Cycle we are no different and for the next four months we are focusing our energies on getting the very best out of the great weather.

There seems to be a myth that it´s too cold here to base yourself in Girona for Winter training but having spent the last three winters here, I´m well-positioned to say that´s not the case at all.

January is probably the coldest month and it is chilly in the mornings if you´re planning to ride early. But wait until 11am and the Mercury will already be up into double figures.

Far from wanting to be accused of biasthe coldest temperatures it got down to on that same week were 5, 2, 2, 3, 4, 6 and 2 degrees Celsius, but these are all hit at night time when you are tucked up in bed and resting those legs after a long day in the saddle.

So, you can see the temperature range on any given day is quite wide – and the same can be said for the actual conditions. We do get wind and rain, but more of the former (especially further north towards the coast) and much less of the latter. Statistics actually show more rainfall in Girona in May, March and even April than January or February. So expect plenty of blue skies and sunshine even if it is a little cooler than the Spring months.

One question we often get asked is what to bring and how to dress appropriately for Winter in Girona. To that we say the following; be prepared for all types of weather, be it wind, rain or sunshine. We get it all, and sometimes we get it on the same day!

Always pack Winter kit (It´s worth noting that Team Sky riders flew home from Majorca last winter as the island got snow, so expect the unexpected!). Bring a good base layer as well as leg and arm warmers, and a skull cap is one of the first pieces of kit I pack wherever I go as you lose a huge amount of heat through your head. Keep your fingers and toes warm with overshoes and gloves – though expect to shed both these layers as the day progresses.

Girona is quite unique in that it is situated between the high mountains and the sea, meaning you have access to all types of riding. So even on a day where rain is forecast there is always a ride window and somewhere in the Girona Province where it is not raining. You’ll often hear a local rider telling their heroic story of escaping rain byheading in another direction!

Aside from it being a top cycling destination it doesn´t ´close up´ in Winter like so many other training destinations. Being a University town there is an amazing energy to the place with so many bars and cafes and restaurants – and more are opening by the week.

The price of hotels and apartments is a fraction of what you will be charged in summer while you’ll also benefit from the quietest training roads.

So, ask yourself what you want out of a Winter training holiday and if it’s any or all of the above, then why not give Girona a shot this year? See more info here. 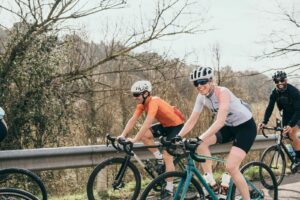