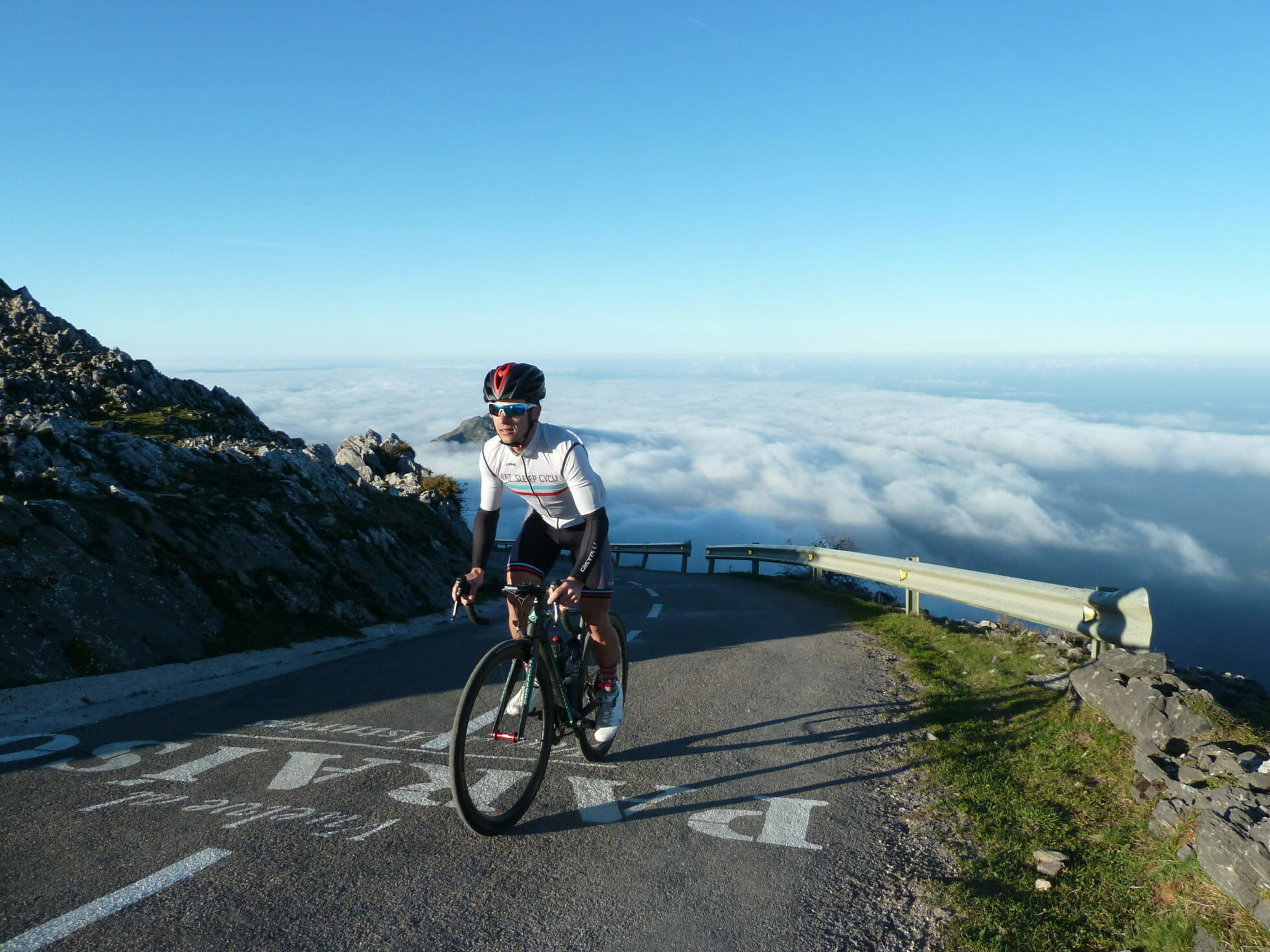 Eat Sleep Cycle’s Lee & Louise traveled north to explore the green lands of Asturias, Cantabria and the hidden gem of the Picos de Europa. Lee gave us this report of the adventure.

I must admit I did not know what to expect from our recent reccy to North Spain. I’d heard that it rains so much that riders race with an aluminium front wheel whilst having a carbon rear one, so I knew it would be green. I was in for a very pleasant surprise.

Louise and I packed the ESC van and embarked on the 8-hour journey from Girona. Once out of the rolling hills of Catalunya there came 3 hours of nothingness. Just when we needed a change, it came – we entered the beautiful Rioja region; vineyards now showing red and yellow Autumn colours, the light at bouncing off them and windy smooth roads through the fields. We arrived at Solares, a sub-district of Santander. When we couldn’t find anywhere to eat (I was definitely becoming “hangry”) we dropped into a corner pub and perched on the bar. The man smiled gently and got to work serving us the best damn beer we’d tasted and club sandwich which Louise still claims is the best she has ever eaten. The immediate hospitality from this man and other people in that bar set the scene for our wonderfully friendly stay in this relatively little-known place. 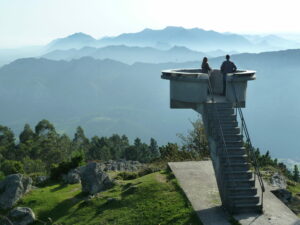 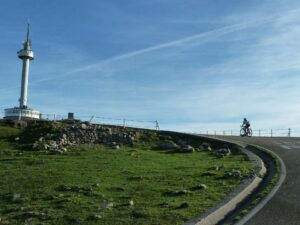 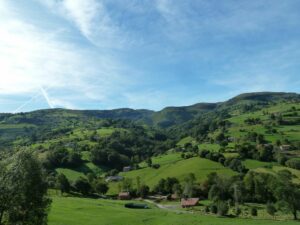 We rode the Peña Carbaga at sunrise, which has stunning views of Santander and the rugged coastline, one of the regions special features. In the afternoon we headed into the Oriental Mountains (which we knew very little of before our friendly barman the previous night) and crawled up the Los Machucos climb, the one the riders protested about in this years Vuelta. I’ve never wished more that I had a compact, at-least a semi-compact, just why would I consider such a ludicrous stunt with a standard crank?! But what a reward at the top! 360-degree unbelievable views and the descent back down was pretty fun too. Following our ride we checked into the Palace (no really, that is the name of the hotel), an old restored, well, Palace which oozes posh but with super friendly down to earth staff. Everywhere you look in this building there is a 500-year old wooden beam or ancient painting. We fell in love the moment we walked in. 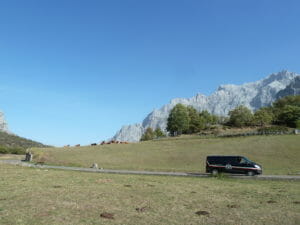 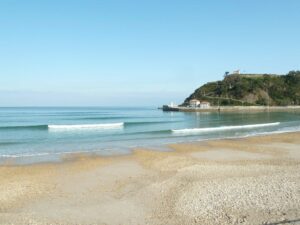 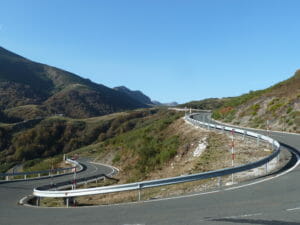 The next day we drove along the coast and entered the Picos mountains. Whilst I try not to compare mountain ranges (each one is unique and deserves its own identity) these can be best described as being like the Dolomites; pointy rock formations shocking to the eye and providing treats around every corner. Just like the Dolomites, you rarely ride up them, but skirt around them on the hills surrounding them taking in the views. The Lakes of Covadonga were a treat. At 1100m, the climb up there just gets better and better. The hotel had warned us that the road was closed for maintenance but it was our only shot so we had to try. As we arrived the security guard was turning away a disgruntled car. He looked us up and down and said “a subir” basically meaning “get on with it”. Cycling is most definitely in the culture in Northern Spain and we felt at home on our bikes, proud to walk into cafes in our skin-tight lycra and stinking of the hard work done.

Everywhere we went local people stopped to speak with us and wanted to tell us about the next wonderful place we must see. We met a Basque couple interested in how things are going in Catalunya. A man with a horse. Cyclists out on a ride wanting to exchange phone numbers. Many barmen. Everyone was just so friendly and welcoming. 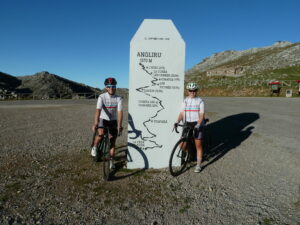 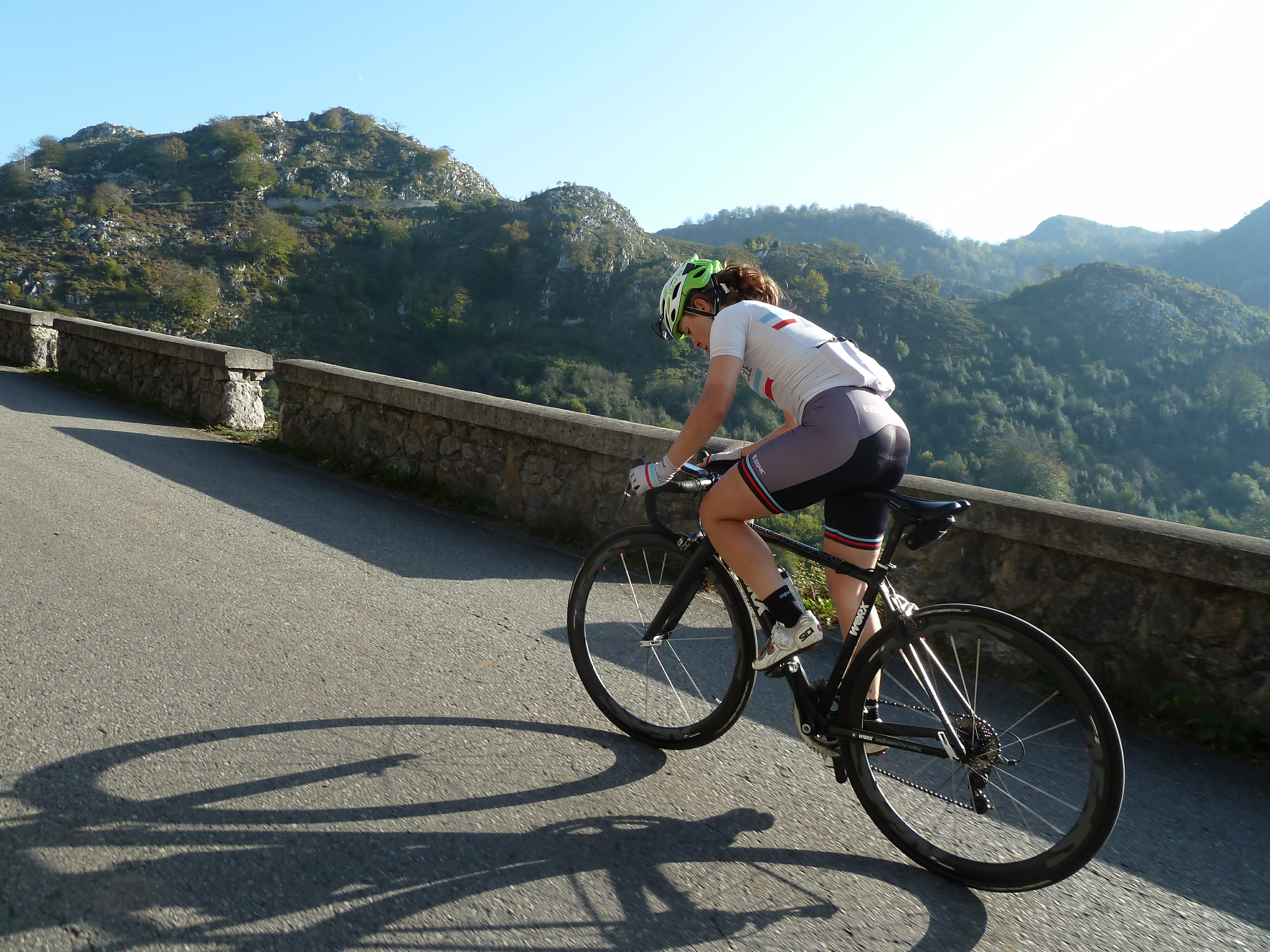 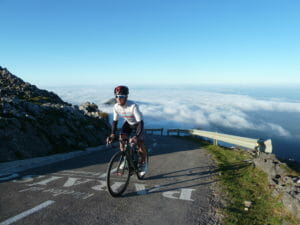 Our final stop was Oviedo, the capital of Asturias. From the outside it’s a big city but once inside the old town we felt right at home. We found a hole in the wall for dinner, which boasted a 10 Euro 2 course meal (with Rioja wine) and was bursting with happy people. It was perfect. In the end it was hard to leave the city, only a 5* castle and the chance of an epic 4000 m elevation ride would tempt Louise away. The castle would be the ideal spot to finish our trips, the ride an epic ending to the cycling. And so we were to tackle the one and only Angliru, often cited as cycling’s hardest climb. Louise had sent me up the Ermita de Alba earlier in the day (that of course had to be reccied) which has a lovely 30% ramp at the top, so let’s say I was warmed up. We nailed a tortilla bocadillo at the bottom and just went for it. If you want to meet your match on a mountain I’d say this is the place to go on your bike. I won’t try to describe it any more than that, it has to be ridden to be believed.

We drove the 9.5 hours back to Girona with smiles as big as our faces and buzzing about the possibilities of trips in North Spain.

Want to find out more about cycling in North Spain?