As Girona based pro rider Paddy Bevin takes the Leaders Jersey in Tirreno Adriatico, Brian takes a look back at Paddy’s career to date.

Years in the making, a potential finally being reached

Knowing the guy a little, he’ll probably hate reading this. He’ll probably say it’s pointless, unnecessary and way over the top. In his eyes, it’s just bike racing. It’s not war, or death or famine. Or the All Blacks in a Test match.

Paddy Bevin is the guy who crashed in the opening minutes of his first Tour de France last year and slammed into a steel barrier so hard that he broke his foot – though the fracture may have occurred as he skittered along the slick tarmac before coming to a shuddering halt.

An eerie silence followed a rapturous applause as he picked himself up and trundled to the finish among the last finishers.

It was sickening to watch and it could have very easily ended his career. Over three weeks later he hobbled into my house for some well-deserved burgers and post-race beers.

In each hand were crutches, his fingers holding the race number he promised he’d bring back for our shop in Girona. ‘Bevin 183’. He didn’t care much for the numbers.

“Mate, I’m not that tough. It was fine,” when a few of us asked how the hell do you finish the Tour with a broken foot.

Paddy Bevin most definitely is not Phil Gaimon.

“How the f*** do you get bottles for Uran? How the hell do you sprint? How is it possible to wake up after two weeks and face a Pyrenean stage knowing your foot is fucked and Contador is going to go bonkers from the gun?”

“Honestly, it wasn’t that bad; you just suck it up and get through it. How’s all at Eat Sleep Cycle?” he says in one unbroken sentence.

I should have punched the guy.

Paddy doesn’t jaw about on social media like others do. He won’t use three words if two will do. Hence his Instagram description of BMC winning the opening team time-trial at Tirreno-Adriatico yesterday. ‘Get on bike. Pedal fast. Win race’.

Humble to a fault is how I’d best describe him.

He’s right on one thing, though. It’s just bike racing, but today he took the leader’s jersey in Tirreno after he finished fifth in the sprint and such was his high-placing that he deposed the two teammates who were before him across the line yesterday. And THAT is a result he has been a lifetime chasing. 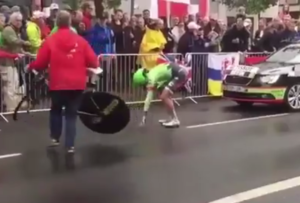 OUCH: Bevin picks himself up off the floor after an horrific high-speed crash on the opening stage of the Tour de France last year.

His last day as leader of a GC race was the 2.2-ranked An Post Rás in Ireland four years ago. There might not be a next time.

“It’s a nice feeling,” he told reporters today. “It’s a really weird feeling to take a jersey off a teammate, especially one that’s here to lead the race. I don’t mind babysitting it for a day, but as we hit tomorrow nothing changes.”

He’s a guy I first came across at the aforementioned Rás in 2014 riding for the New Zealand national team. There, he won a brutal stage two from four chasers by almost two minutes, despite a furious chase.

There were sizeable groups four, ten and twenty-five minutes down by the finish.

I recall the time gaps we got in the press car that day from when he attacked on his own with 40 kilometres to go – and the category one climb of Doonagore still to come.

I just thought ‘this isn’t normal’ but neither was the way he won another stage a couple of days later, chasing down a breakaway with just two teammates for help after the two others became ill.

Nobody else was willing, or able, to assist but that didn’t stop Bevin doing much of the driving over the 10 climbs that day, leading out the sprint into Caherciveen and then blitzing it.

That he didn’t win the race outright – or even finish in the top 10, did little to sway my thinking that the guy was simply world class and had to be at a higher level.

It took a year of mopping up wins for Avant Racing in Australia to really get noticed but fast forward a couple years and he’s at the Vuelta, riding for Cannondale and dying under a scorching Spanish sun.

For 10 and a half days he hauled himself around the country, only to climb off with illness on stage 11.

A day later I received a message, “You in town bro?”. The Vuelta had spat him out and he was back in Girona with his tail between his legs.

Sitting down to dinner that night he struggled for words, yet to his enormous credit, didn´t touch a drop or any of the sweet things I´d laid on. A weaker man would have folded and devoured the lot.

Then, life showed it wasn´t so much unfair as mean when an update on TV gave breaking news of a massive earthquake in Gisborne on New Zealand´s North Island – exactly where Bevin´s parents were at the time. He tried to contact them to no avail, but they were fine.

Still, an ugly moment where a man was kicked while already on the floor. 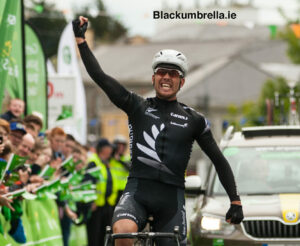 HANDS IN THE AIR: Bevin celebrates winning the fourth stage of An Post Ras in Ireland in 2014.

Every rider goes through misery but for a rider whose career was really only taking off, Bevin fell off a cliff and that month was a real slap in the face. His DNF at Eneco Tour a month later no less of a blow.

There have been many setbacks in the interim; injuries at the worst possible time – such as before the nationals this year when he was a banker to win the time-trial, the Tour de Suisse in 2016 was a disaster, riding on bikes clearly not up to the mark would crack any rider, missing an entire Classics season last year (except Paris Roubaix where he finished outside the time limit) to name but a few.

So, at the end of two years, aside from an amazing ride in the Paris Nice prologue (3rd), a few sniffs of victory at the Tour de Suisse, winning the NZ nationals, his only win was in a TTT in the Czech Tour, the latter NOT coming in contract year and in a field stacked with low-budget conti teams.

Hardly a CV you’d go to an interview sure of landing the job.

This is what makes today special for Bevin and anyone who knows him. Cycling is a puzzle that takes figuring out and because the pro game has become so specialised, that only specialists can really win on the big days.

Bevin is not a climber, or a sprinter, or a tester, but he can hang with the very best on his day.

He has been hammering on the door for years now and not had a huge amount to sing about.

Today, that all changed, and if he loses the jersey tomorrow, the day after or the day after, at least he can look at himself and say ‘today, I realised my potential’.

And isn’t that all any of us want to do with our cycling?