Paddy Bevin Tour de France Diary; “Getting in the break is about skill, horsepower and luck” 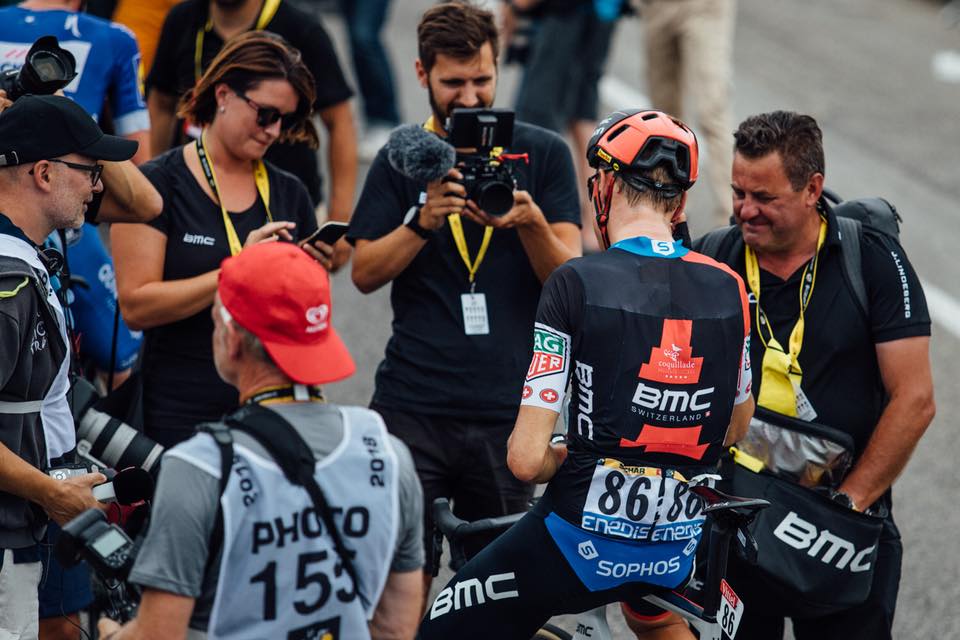 We´re edging higher into the double digits for stages completed and thankfully, yesterday offered a little more respite than the three days previous.

There was more downhill than uphill, which is rare, but don´t think for a second we were out for a Sunday ´bunchy´!

Yes, we covered 170k in an eye-watering 3 hours and 45 minutes….at an average speed of 45kph, bringing my saddle time up to a tidy 55 hours for the race so far.

It was just about trying to keep my legs as fresh as possible in the hope I can get in a break soon.

The long, hot stages in the Alps have taken their toll and the peloton is definitely tired now, and some more tired than others.

Yesterday we managed to get Michal in the break and what a relief that was that the move went by the time we hit the base of the  cat three climb after 30k!

Michael and Dimitri Claeys (Cofidis, Solutions Credits) stormed across, the peloton gave them the green light and they were gone for much of the day.

The fact they were gone before the cat three climb meant there was no real race up it and we in the bunch were all spared a big effort!

Getting in a break is a complex mix of blind luck,  timing and skill.

A rider high on GC is unlikely to get away, as is a sprinter because nobody wants to go to the line with them.

Guys who have had their heads down in the race are given more slack, and Michael is one  of those. He skipped across at a perfect time, so his timing was right.

In short, if you´re strong as a horse you don´t need as much luck. If you´re not so strong, you need to be in the right place at the right time and get the nod from the bunch.

Michael was the last man standing yesterday as the other three dropped off one by one.

Groupama-FDJ-led were among those really driving it on and with 25k to go it was clear Michael was never going to stay out there as his lead was cut to 30 seconds.

He made one last effort to try and stay away by going really deep over a small climb but with a hungry pack containing Sagan, it needed a lot more than what Michael had left to survive.

Still, he ended the day as the most combative rider and that was very fitting, given his efforts.

Greg gave the sprint a decent crack and took fifth, which proves he is far more than a one-trick pony!

Today we´ve another hilly one with an uphill finish on the cards. We start in Saint-Paul-Trois-Chateaux and finish in Mende with a total of 188k and 4 categorised climbs to get through.

The stage is too hilly for a pure sprinter to win and could be one for the break so I´ll be trying to get in this!

Let´s see how we go.