Paddy Bevin Tour diary: “It´s nice to have everyone there in a stressful situation.” 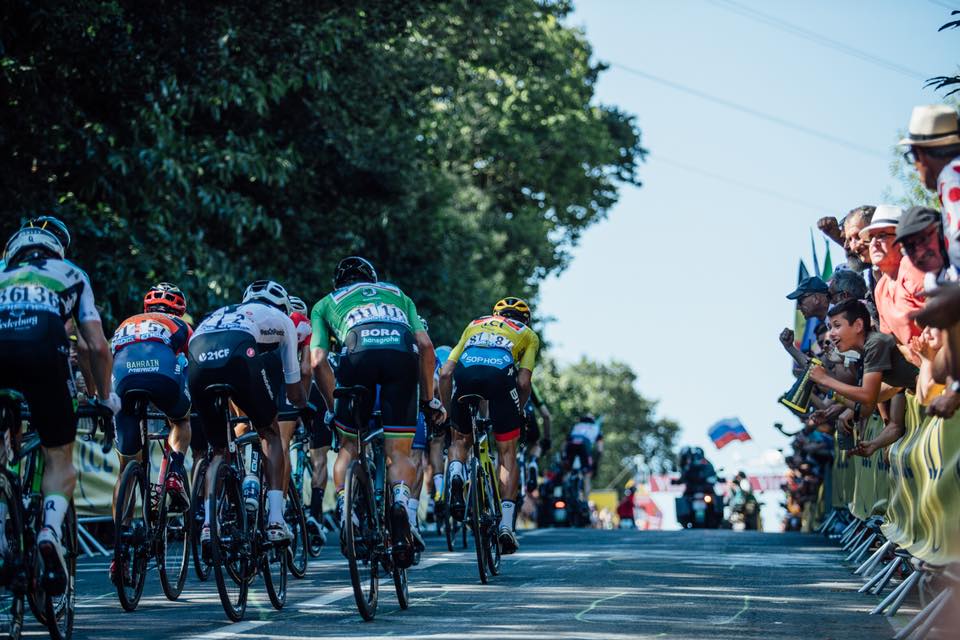 So, we´re still in yellow for another day and that makes it three days in-a-row we´re starting the stage with the coveted jersey.

Greg was coolness personified yesterday and rode a textbook final, following the wheels and not allowing any major GC threat give him the slip.

Of course, the top of the standings are so closely congested that he had to be vigilant but he really showed his quality as a bike rider  crossing the line 12th and losing no time to any of the big guns.

In fact, the day got even better for us when we discovered what happened some of the other GC guys.

Froome lost five seconds to the group containing Richie, Yates, Quintana and Nibali, while Dumoulin had bad luck with a puncture and lost 53 seconds.

Richie, our main guy for the overall, did a similarly perfect job to Greg, squeezing it a little in the final and being pro-active instead of reactive.

He came across the line just ahead of Greg in 11th, moved up one place overall to 11th and he´s looking better by the day.

Okay, Dan Martin smoked everyone with that winning attack at a kilometre to go and nobody could match him, not even Richie.

A hat tip to the Irish guy for that effort into the wind with a racing pack on his wheel.

So, my own day was probably a little more uneventful than theirs, and when I think about it, the exact opposite in energy use; I rode hard and long early, they rode hard and short very late. But I´m okay with that.

After the break went – kudos to my Kiwi buddy Dion for getting out there again, I had a good, long stint in the wind at the start of the stage, just dragging the bunch along.

Brittany can be a windy area and true to form, we got pretty well blown around the place.

The conditions were far from wild but they were enough to see Nibali, Dan Martin, Fuglsang, Quintana and Mikel Landa lose contact for a while before getting back on.

Roglic too. He had to chase for almost 30 kilometres before getting back on, and that´s not what he´d have wanted if he´s really looking to win the race.

Thankfully, my own stint at the front meant I had no such worries about being caught behind, and the same for the boys. So that was another little victory for us.

You´re at the front, you know there´s panic behind but when I glanced around to see where the boys were, it was comforting to see them right up towards me.

I stayed with the bunch until around 20k to go when I was completely fried and the punchy climbs in the final were too much for me.

Quick-Step were trying to set something up for Alaphilippe, Sky were pressing, as were Mitchelton-Scott and several others.

The pace just went up and up and up, and I just had no more. But my job was done and I was happy I´d done my shift and left it over to Greg and Richie.

Mitchelton-Scott showed some real quality by firing Jack Bauer loose in an effort to force a reaction from the others.

With his teammate Adam Yates´ability on a sharp finish like yesterday´s, it made total sense.

Jack was absolutely flying and what a moment again for New Zealand cycling to have him light up the final like that!

He was always going to be caught but what people probably don´t see is that selfless effort from him allowed Yates finish 6th and move up three places overall to 13th.

I rolled in with the grupetto; the sprinters, the injured and the sick, all of us with our own different tales of how the race went.

Today´s stage will be more of the same for me; a long pull on the front, playing the domestique role, keeping Richie and Greg in the front and keeping a close eye on that breakaway´s advantage.

Some of you have been asking what do we eat the morning of a long day and for me, it´s a pretty tried and tested routine of omelette, muesli, banana, yoghurt and a smoothie. Maybe I´ll have a bit more of each this morning given what´s ahead!