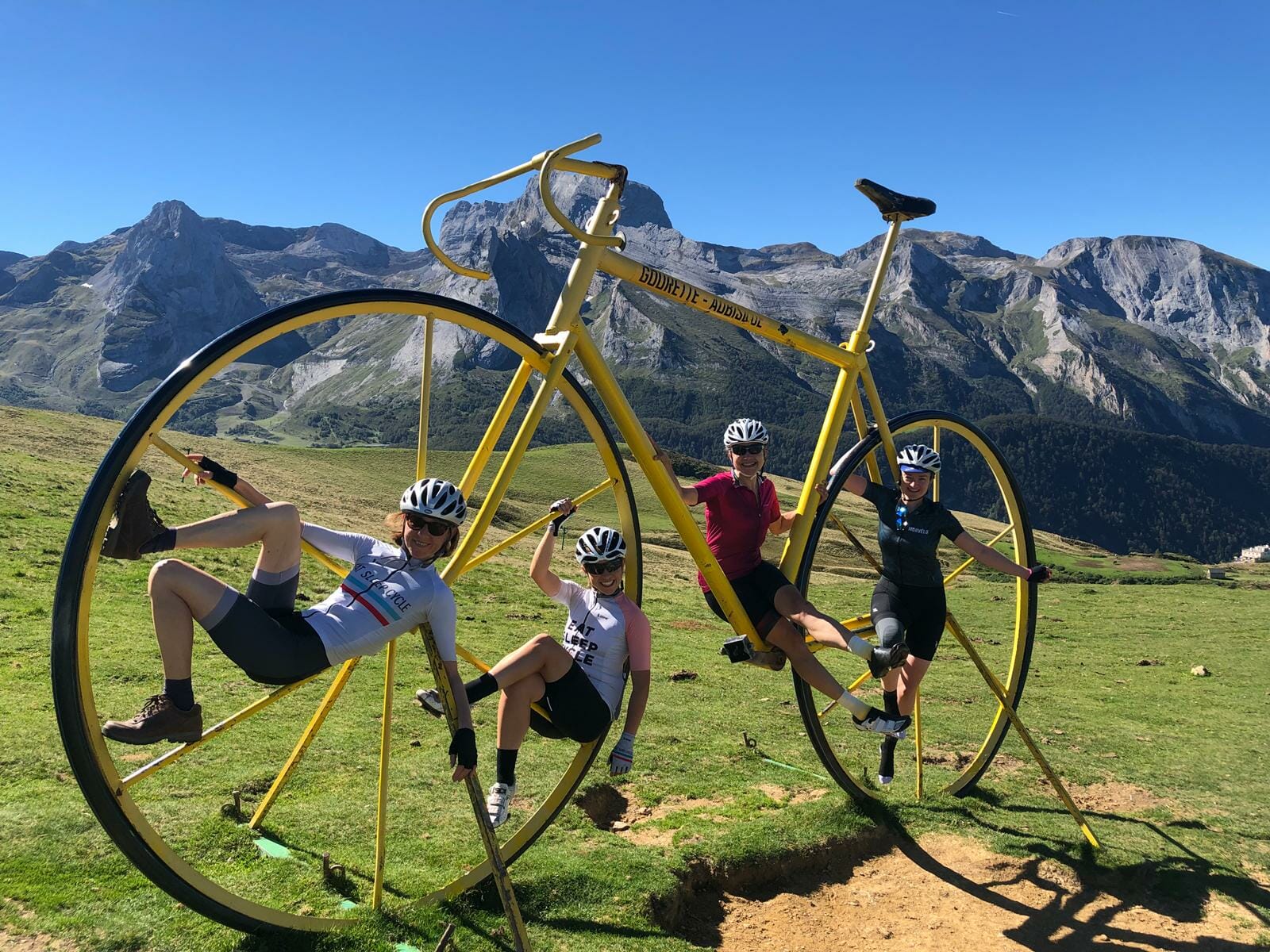 This is a guest post by Kath, one of our lovely guests on our recent Women’s Pyrenees Tour who has written all about her experience on her blog.

Conquering Cols in the Pyrenees with a different edge – we were all women!

I had signed up to this holiday several months ago – I knew that September would be a bit stressful (moving house!) and a cycle trip to take the edge off would be needed. I’ve done a few cycle trips here and there, either as part of a group or solo, and given the other things going on in my life, a guided trip somewhere exciting was ideal. I’ve wanted to visit the Pyrenees on a bike for a while having spent some previous holidays nearby and looking longingly up at the mountains. But I’ve never ridden a stage of the Tour de France and I really wouldn’t consider myself a mountain climber. I had noticed Eat Sleep Cycle on social media, as they regularly post about their trips and regularly introduce their staff. Their tour of the Pyrenees advertised many of the classic climbs and staying in hotels within beautiful spa towns, but a women-only Tour? What would that be like? 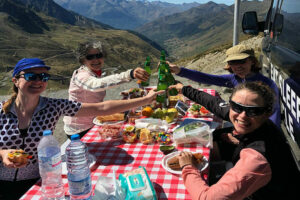 Having cycled many years in various clubs and with friends, cycling with other women has always been important. There’s nothing wrong with cycling with men, but we are from different planets, and if you’re not an advocate of that idea from popular science we are raised differently and influenced by varying praises and expectations. Cycling with only women is unusual – I’ve probably only had 2 rides consisting of only women and both were organized specifically with this in mind. The riding pace is just as strong as with men, as is the distance, but the conversation and support are totally different. Support is there in many different forms, from providing encouragement on your fellow rider’s ability to sharing stories of your experiences, advice on achieving goals and ambitions, and the trials of cycling with MAMILs. There’s definitely less chat about groupsets – but I’m pretty happy about that!

Whilst on the holiday we were guided by Louise – owner of ESC and cycling extraordinaire. Louise had taken several groups on a similar tour before, but this was the maiden Women’s Tour outside of Girona. Louise was excellent at providing all the information required during the trip and politely providing the necessary pacing to prevent a blow-out later on and company when the climbs got harder. A description of a forthcoming climb always came with a grin from a woman that loves the challenge. I really appreciated the advice as I regularly wanted to cycle away at the beginning of a climb out of pure excitement, not acknowledging that I had 12km to go at an average of 7%.

The first day was a short ride up to Superbagnères, with a strange and foreboding ski hotel up at the top. It was brilliant to be back on some switchbacks, something I love descending much more than climbing. On the descent I was fortunate to have a wildcat cross my path ahead, even in the Pyrenees these creatures are unusual to see. Day 2 covered Col du Ares and Col du Mente, both beautiful climbs into the mountains. Day 3 was short and sharp, covering col du Peyresourde and Val Louron Azet just 44km; there was an optional extra but the hotel pool was calling… This slightly easier day was in preparation for day 4 – Col du Aspen and the iconic Col du Tourmalet. 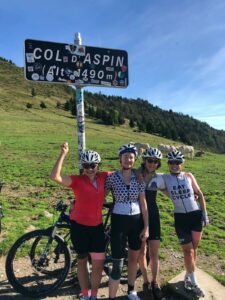 Most people who we passed were clearly delighted that a group of only women were cycling the Pyrenees. From the locals we had many waves and grins of joy, and perhaps a bit of bewilderment. Most other cyclists were very pleased to see us, and many would stop to engage with us. Perhaps the questions were different; ‘is that an electric bike?’ ‘Did you cycle up here?’ Sigh. But not always; ‘is that a 35-25 groupset?’ ‘Just stunning isn’t it?’ ‘Where are you from?’ The Col du Tourmalet was a pleasure to ride up, one foot in front of the other and just keeping soaking up the exquisite views. By this point my new friends and I had bonded; ‘has is just kicked up again?’ ‘No whingeing on the yacht, Ladies!’. During our ride there was several groups of other cyclists, including a triathlon competition, I’m just in awe of those cyclists whizzing down the Tourmalet to then start running.

While we were climbing our driver Brooke was putting together a feast for us, often at the top of a Col (we were very lucky with the weather). This was where a guided tour really came into its own; having a spread of salads, cured meats, carbs and juice all ready for you at the top of a mountain you’ve just climbed. We were definitely the envy of everyone else at this point and had several requests to join the table. Brooke also acted as our social media correspondent and gave us all several lessons in the wonderful world of Instagram.

The choice of hotels was perfect, varying from a traditional French lodge serving classic cuisine through to a ski hotel with a pool to relax by (and plunge into) at the end of the day. Our belongings were transported in the van, again the ease of a guided holiday really made the Tour ideal. 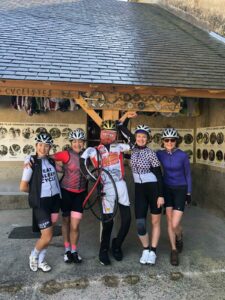 So what was a women-only Tour like? I came back from holiday really feeling like I had a holiday. The support for each other was brilliant, and this I have found is sometimes harder to identify within mixed groups. And we had a lot of fun; it was an absolute pleasure to cycle with other like-minded women over the five days of riding. Cycling in the Pyrenees was a wonderful experience and I’m already planning for my next trip there. I’ve returned from holiday with more confidence in myself and ability to climb up anything. After-all, I cycled the Queens Stage of my Tour of the Pyrenees.