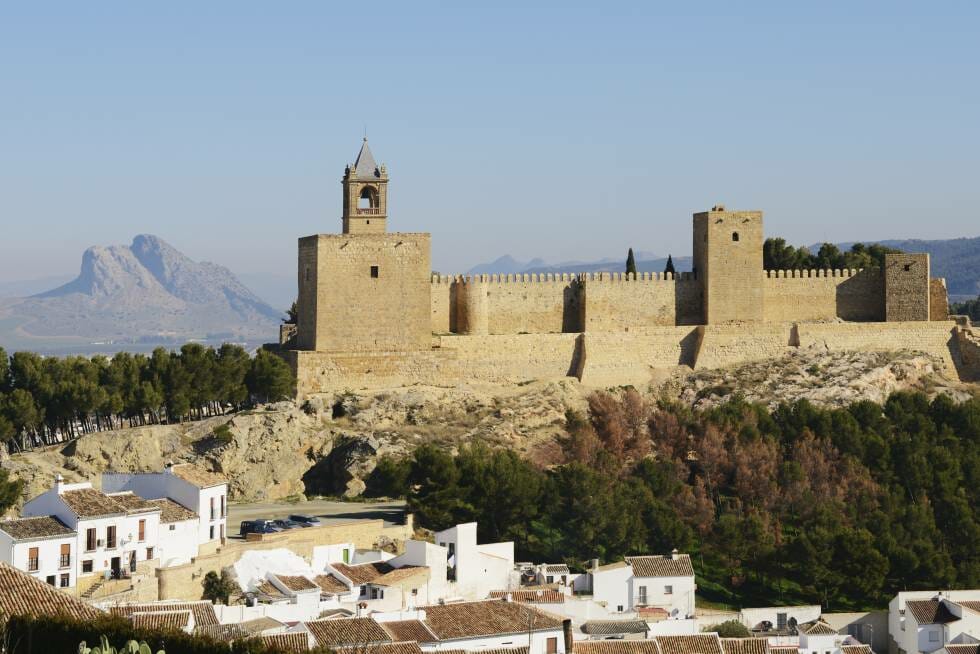 Eat Sleep Cycle founder Brian recounts one memorable, epic day on the bike whilst out on a recce for our Andaulica Experience Tour.

The day started out like any other; an informal pre-ride briefing outlining the course, an estimated timeline, advice on what to wear as well as attractions and landmarks to keep an eye out for.

The course was a loop of 138 kilometres with 2,832 metres of vertical – so a not insignificant day and given it was a recce trip, a support vehicle backed us up behind.

What could possibly go wrong, you say…

We were ‘just’ four; Kris, Rico, Fabio (AKA Aru) and myself, with my brother John in the van behind. Advantage us.

The plan was to climb out of Antequera to the top of El Torcal (8k, 1,230m) at our own pace, meet John at the top, get a jacket for the descent, meet at the bottom and ride the next 50k together.

Rico would then get in the van, Kris would be supported by the van while Aru and myself rode at our own pace unsupported until Kris jumped in and the van would speed up to catch us. Easy.

All good so far except the plan started to unravel when the ‘bottom’ of the climb was misinterpreted by Aru, who went all the way back to Antequera.

That required John to shoot down and redirect him on the right course, which Kris, Rico and myself were slowly making inroads on.

It being January, the place was deserted and I struggle to remember roads as beautiful and deserted as the ones we rode on Saturday January 13th this year.

The blacktop from Villanueva de la Concepcion to Villanueva de Cauche should be on every cyclist’s bucket-list because it has everything: sweeping descents, white-washed villages, rows of orange and lemon trees and a genuine old-time authentic Spanish feel that’s all too hard to find.

A man raised his head, his voice and his walking stick when I stormed through, lifting a few leaves off the road. I hammered on.

I should add that Kris and Rico were behind me but this was one of those roads where you leave people alone. There is no need for talk on roads like these. You look and you listen.

Riding on this day gave me concrete proof that the career path I’d chosen was the right one. I remember looking down and thinking ‘holy f*** I’m in the big chain ring’. Funny how riders go well when they’re happy.

An hour later and things started to change, however.

Aru was uncontactable. A guide’s nightmare. John was tracking Rico and Kris who were loving life. Kris was loving it so much that she decided to truck on, while Rico took refuge in the van. The group was now split in two: Brian + Aru. John + Kris + Rico.

The only issue was, where was Aru?

So back I went, down those same hills, up those steep ramps…no longer in the big chainring and clouds greying overhead. 10 kilometres I rode and still nothing. A bad feeling washed over me.

I happened upon an intersection at the bottom of a huge climb and it was there where I stopped. Still no contacting Aru and my own battery disappearing as quickly as the sun from the sky.

‘There’s a tall guy here, with a bike’…it could only be one man and the bike neatly placed outside the bar in Villanueva de la Cauche told me where I’d find our fugitive.

It’s a tiny hamlet of some 30 identical white houses. And a bar. It’s a typical settlement and dates back to the 16th century where families covered their rent by producing anything they could, though eggs, cheese, fruit  and cereals were the most popular means of payment.

Stepping inside the bar was like stepping back 500 years in time; a hearth with a roaring fire, wine being gulped, huge plates of food being lashed out and one confused Brazilian in the thick of it…toasting nicely by the fire, umbilically attached to his charging phone.

“My phone died,” he protested. I could have thumped him but instead, I just laughed. “Dos copas de vino tinto aqui por fav,” I called to the overburdened waitress carrying 5 plates, one on each forearm.

It was late afternoon, a meagre 36 kilometres done, slightly tipsy, and we had 100 kilometres still to ride, with rain due in the next hour.

Now the plan was very different: we do a two-up time-trial for the next 3-4 hours and hopefully make it back by dark. There was no time for stopping, no photos, just a bloody-minded desire to get home.

So we swished back the last of our wine and off we went, Aru neatly locked onto my back wheel.

The next four hours whizzed past like a brilliant night out over all too quickly. We hammered descents like breakaway riders with 10 seconds under the red kite. I dropped Aru on the climbs, he tried to drop me on the flat. And we repeated this over and over and over again for the next hours.

It was January in Andalucia and nothing was happening, anywhere. Not in Alfernate, not in Anfarnatejo and only for a few young guys huddled around a rally car outside a garage in Mondron there was nothing. Not a sound.

If I ever take ecstasy, I hope they’ll be as good as the feeling I got that Saturday in January.

An untimely lowpoint was a pack of angry dogs chasing us uphill for 200 metres.

A timely highpoint was provided in the shape of the ESC van parked by the side of the road with Kris just after getting in; we had caught her and found an oasis.

“Fabio, 2 minutes, we have to stay going.” We topped up our water bottles, took an energy bar each and kept going. This was the last time we’d see the van and we had 58 kilometres still to go. 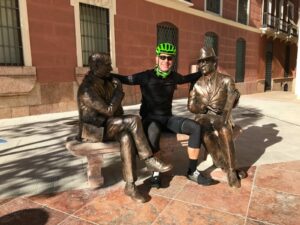 We climbed for 12 kilometres to the mirador at Fuente de los 100 Canos and took 10 seconds to marvel at how tiny and insignificant we were in such a huge expanse of land and space.

It was 4.10pm and time was most definitely not on our side. Fabio and I have a saying that goes “only speak if you can improve the silence”. So as you can imagine with fading light, fading energy, draining water and food supplies there was no time for chit chat.

A 20-kilometre descent was as thrilling and cathartic as it was necessary and Fabio hitting 65 mph was just the chink of light we needed to give us a glimmer of hope of making it back before we’d need a rescue.

And then we reached Archidona with the feint dim of Antequera’s street lights visible 20 kilometres away. Our chances began to look up.

The road was flat and newly-surfaced but we were tiring and fuel supplies were running low….or at least mine were anyway.

I recall doing a hard pull for at least 10 kilometres when the first twitches from my hamstrings came. F***. Lactic acid was about to invade my legs as darkness closed in.

As bike riders, inspiration can come from many places; a cheer from a friend standing roadside, a coke, a push, a pull, a tailwind, a draft off a tractor.

Fabio is one of the smartest men I know and whether by accident or design, he (finally!) did a turn – and a bloody strong one at that.

He came around me at twice my speed, said “get on” and dropped at least 3 gears in the most beautiful sounding click-click-click I’ve ever heard.

A dog arrowed across the road in a failed attempt to kill us but Aru nor me said a single thing, not at the time anyway.

Antequera was coming at us, cars and vans came around us and we jumped into that sweet spot behind for even just a moment’s respite. We were close – but there was still work to do.

Next thing, incredibly, Aru reaches back and pulls out a gel. A gel! He had gels in his pocket for the last 80 km and I gave up my last chocolate croissant when he was suffering! Again, no words, yet.

I just hung on and made a mental note. But that was ammunition so when I mustered the strength to come around one last time I vowed to make him hurt so I railed it through roundabouts, bending into corners and sprinting out of them like a GP rider.

It was officially dark and dangerous by the time we limped into the parking lot of our hotel.

We’d long since discarded sunglasses, snot caked our arm warmers, a layer of salt around both our mouths and when my bloodshot eyes peered into his we both just broke down laughing and shook hands.

“I told you it would be a f*cking adventure.”

“Now Fab. About those gels you were hiding?!”

For those seeking an adventure in Andalucia and who would like to rival Aru’s max speed head over to our Andalucia Experience Tour or read on for Lee’s latest review of our cycle tour in the Sierra Nevada mountains.