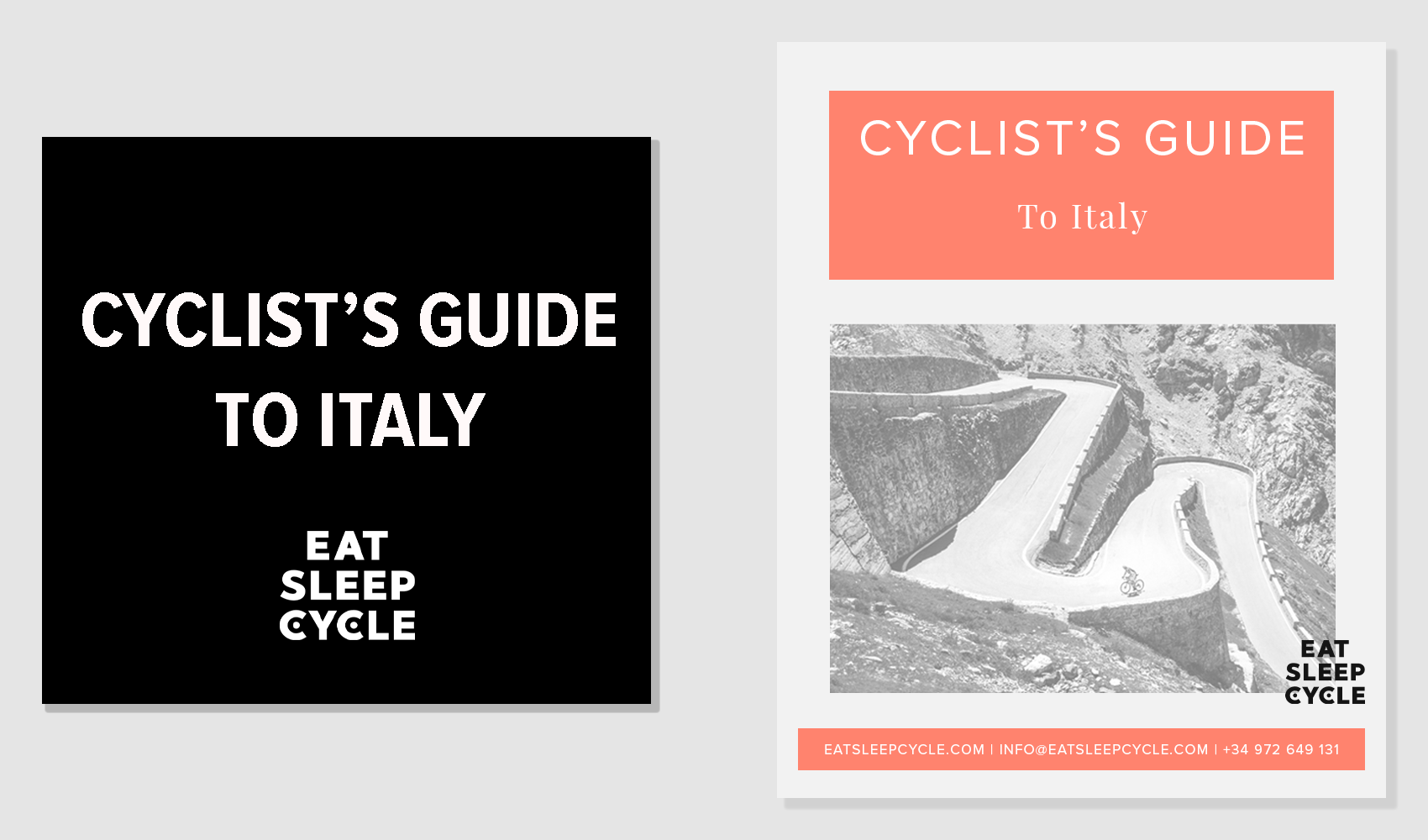 Italy has a special place in Eat Sleep Cycle history and we cannot wait to return to bring more of our amazing guests to this incredible country in the not too distant future. Italy has cycling deeply embedded in its culture & history. Capturing the depth of riding, the variety of terrain, the passionate cycling culture, the incredible food, the cycling industry in just one blog is pretty much impossible. But here I hope to give a tantaslising taste of what Italy can offer for the cyclist.

Italy is packed with beautiful regions to explore by bike – there are high mountains & sparkling lakes in the north, beautiful vineyards, rolling landscapes & rustic farmhouses in the central region of Tuscany & stunning flat lands, mediterranean coast & whitewashed villages in the southern region of Puglia. Plus the Apennine mountains, the islands of Corisca, Sardina & Catania, the incredible Cinque Terre… the list is endless!

The north of Italy holds many delights and challenges for the cyclists. Not a place for beginners, the Alps, the Dolomites, Veneto, Piemonte & Lombardy offer off-the-scale-awesome riding.

To the north of the lagoon city of Venice lie the towns of Conegliano, Basso del Grappa & Feltre, all fabulous bases for riding. From Bassano discover the beautiful Veneto region & climb the Monte Grappa, a great warm up for the high mountains.

In the north east corner of Italy is a climb which inspires terror amongst the pro’s – Monte Zoncolan. The Zoncolan is a regular feature in the Giro d’Italia & the climb from Ovaro features a leg-busting 6km section which averages 15%.

To the west lie the picturesque Dolomites, known around the world for stunning rock formations. A must-ride loop is the 54 km Sella Ronda from Corvara – one of the most beautiful rides in the world which features four mountain passes. The Sella Ronda loop forms a part of the annual Maratona del Dolomiti sportive – an epic ride which also features the iconic Passo Giau & Passo Falzarego. 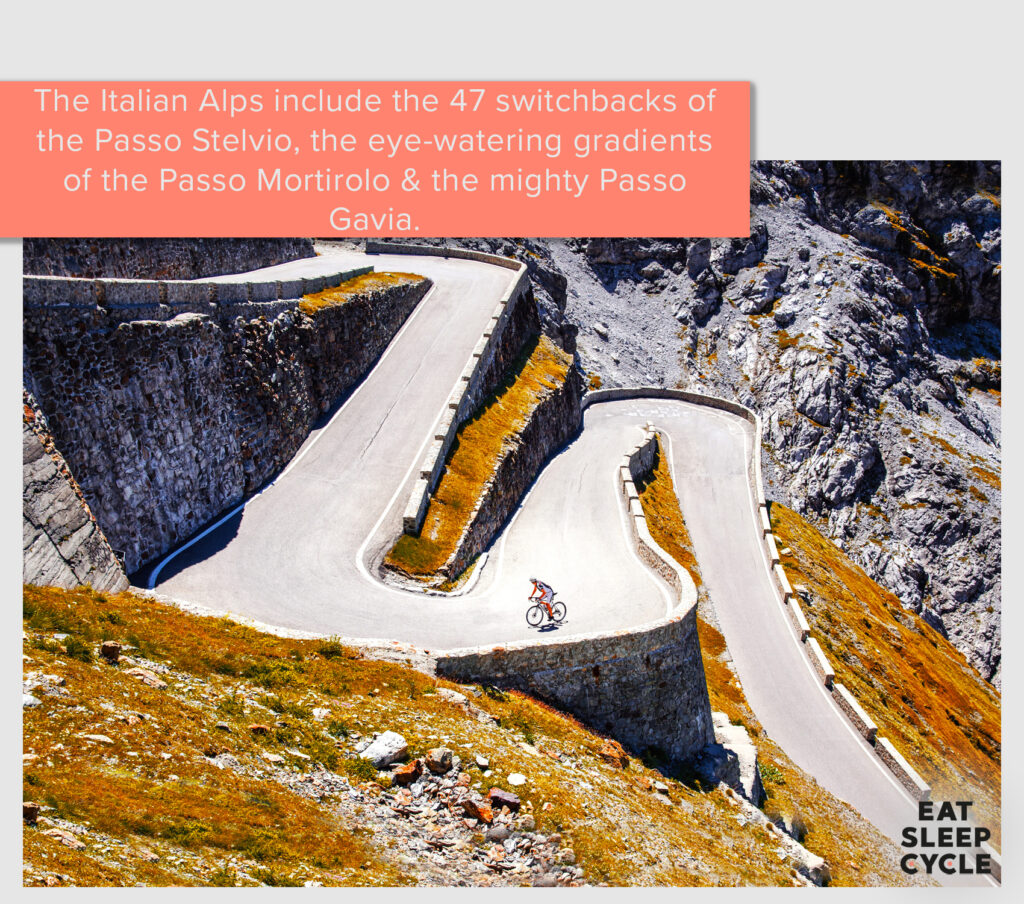 Continuing west we reach the Italian Alps, high mountains which include the 47 switchbacks of the Passo Stelvio, the eye-watering gradients of the Passo Mortirolo & the mighty Passo Gavia. These climbs are where the key battles of the Giro d’Italia are fought every year & are where cyclists become legend; remember Andy Hampsten cresting the Gavia in a snow storm to take the maglia rosa in 1988 & in 1994 the legend of Il Pirata was born when a young Marco Pantani launched a breathtaking attack on the Mortirolo.

After the Alps it’s wise to head to the Italian Lakes and enjoy some rest & relaxation. But don’t be fooled – from lakeside hotels the only way to ride is around the lake or up & out. Be sure to pay homeage to the Patron Saint of Cycling at the Madonna del Ghisallo shrine & test your legs on the short but brutally steep Muro di Sormano. As well as regular vists from the Giro d’Italia the Lakes of Como, Garda & Maggiore also play host to the final monumnet of the season, the Giro de Lombardia.

If you have any energy left, continue the adventure & head west again to Piemonte. Climb the gravel slopes of the Colle de Finestre, as well as the epic cols of Nivolet & Agnello. Drop down back to the Barolo wine region & savour the rolling roads & indulge in a spot of wine tasting to round off the northern Italian experience.

If you’ve got 3 or 4 weeks to spare this would be an incredible Grand Tour: fly into Venice, ride Trans Dolomites, hit the Italian Lakes for a week in Lombardy, then continue west to tour Piemonte. Fly out of Milan. 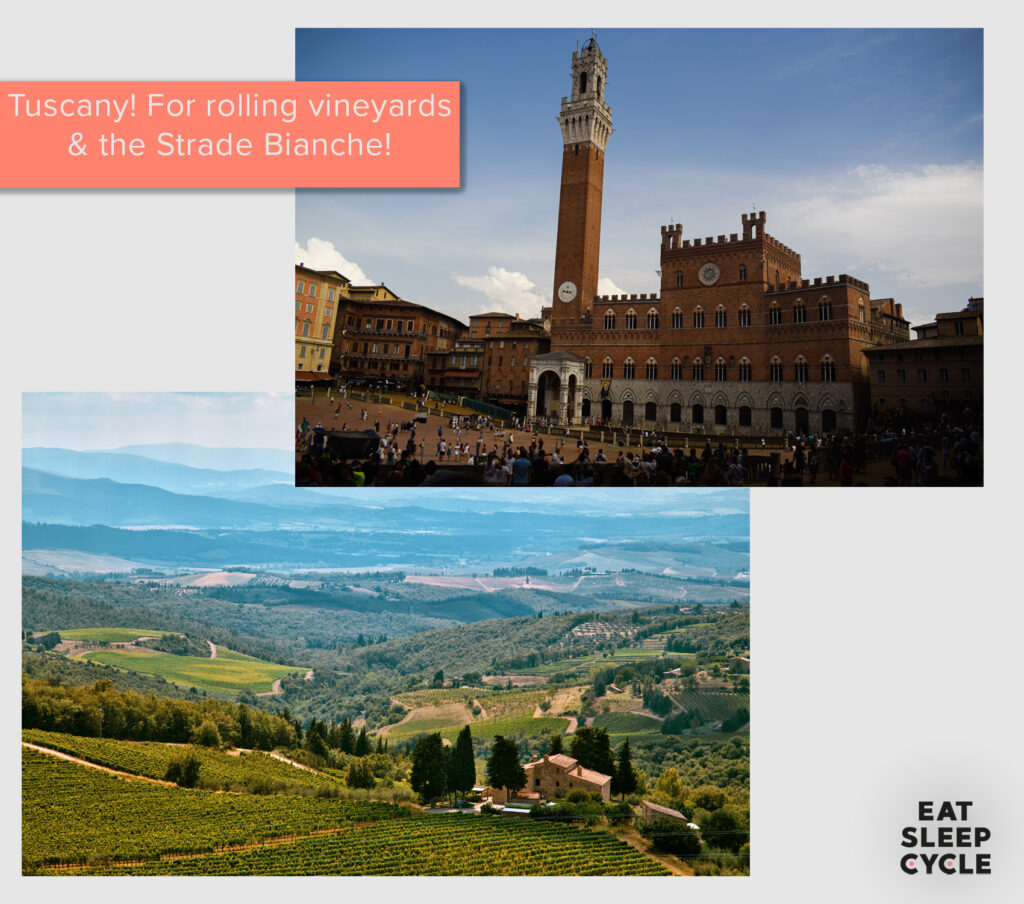 Every year the city of Siena hosts the Strade Bianche, the southernmost Spring Classic of the calendar. Riders tear across the white gravel roads of the Crete Senesi region, tackle short, steep climbs & a fabulously technical parcours. The first rider to make it to the Piazza del Campo in the centre of Siena takes the honours.

Want to cycle in Tuscany?

Join us for a long weekend of cycling in Siena for the Strade Bianche or ask us about our brand new Tour of Tuscany!

Italy’s Grand Tour is usually a highlight of life in May. The race started in 1909 and grew from a an Italian-only race to include riders & teams from all over the world. A total of 49 riders won the first 2,448 km race, with Luigi Ganna taking first place. In the 1920’s Alfredo Binda was the dominant rider, and it took the Ironman of Tuscany, Gino Bartali to defeat him. Bartali’s dominance was only challenged in 1940 by his 20 year old teammate, the great Fausto Coppi. 10 years later, in 1950, Hugo Koblet of Switzerland became the first non-Italian to win the Giro. American Andrew Hampsten became the first non-European winner in 1988, and the first South American winner was Nairo Quintana of Colombia in 2014.

Ask us about following the Giro d’Italia on a custom tour. 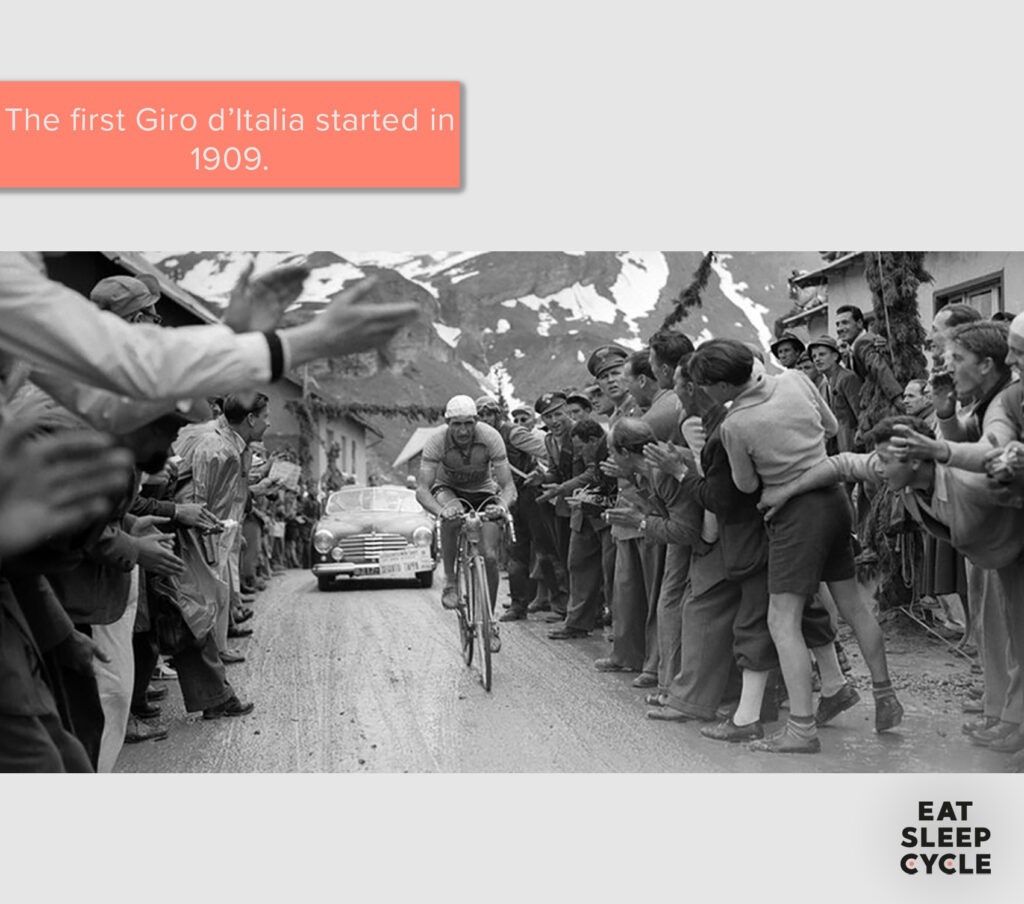 L’Eroica Strade Bianche (“Heroic race of the white roads”) was created in 1997 as a granfondo for vintage bikes on the white gravel roads around Siena. The concept was to recreate cycling’s so-called “heroic era” from the first half of the 20th century, when most bike races were ridden on dirt or unpaved roads.

The Strade Bianche is Italy’s youngest race on the World Tour calendar, but it’s quickly become a classic. The peleton races across the Tuscan countryside across a mix of country lanes & white gravel roads. The first edition rolled out in 2007, with a womens edition starting in 2015.

One of the five monuments of cycling, Milan-San Remo was first held in 1907. The 298 km race is the longest one-day race in professional cycling and its flat(ish) course makes it a favourite of the sprinters. The course runs from the city of Milan across the plains of Piemonte & Lombardy, to the Liguran coast. The entire second half of the course has a view of the mediterranean as the race makes its way to the fashionable seaside resort of San Remo.

If Milan-San Remo is the sprinters classic, the Giro Lombardia is the climbers classic, and the last monument of the season. Held in the autumn the race is also called the race of the falling leaves and started in 1905. The route has changed many times, with the only consistent features being Lake Como and the iconic Madonna del Ghisallo climb.Other famous climbs include the short but tough San Fermo della Battaglia and the 9.6 km Colma di Sormano.

Italy in one of the major fashion houses of Europe & the same goes for cycling clothing. Itlay produces some of the world’s best fabrics & its no surprise that a multitude of cycling clothing is made in Italy and use this fact as a part of their marketing as a sign of quality.

As well as clothing, Italy has several highly regarded bike brands. Institutions like Campagnolo, Bianche & Pinarello are proud of their Italian routes. Family run business Basso Bikes continue to proudly make their frames in a factory in Bassano del Grappa – a step up from the family garage where Alcide Basso produced his first frames.

There is so much more to write about cycling in Italy – watch this space for our upcoming features on our favourite Italian cycling climbs & recommendations for the best places to stay, eat & drink!

Do you want to find out more about cycling in Italy?

As soon as you’re ready to travel we would love to show you around Italy! Check out our Italian Tours or give us a call now on +34 972 754 301 or contact us online for more info!