Guide to Cycling in Majorca 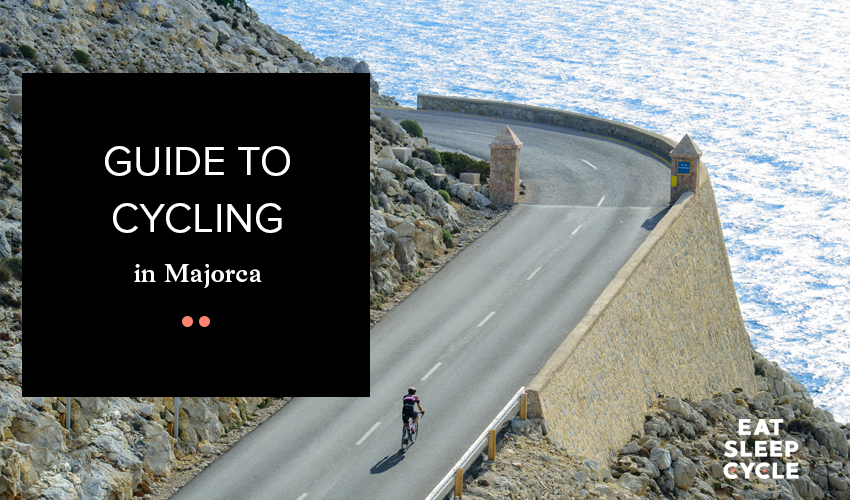 Majorca (or Mallorca as they say in Spanish) is arguably one of cycling’s most popular winter cycling destinations for getaways and is synonymous with pre-season training camps as teams escape to catch some early-season sun and take advantage of the smooth, well-maintained roads. The best times to visit the island are spring and autumn when the weather is not too hot but is warm enough to get those cyclist tan-lines going.

The island even hosts its very own sportive the hugely popular Mallorca 312 – the course of which originally traversed the entire 312km lap of the island but now maintains the same distance but varies in terms of parcours year-on-year.

Because so many cyclists have been coming to the island for such a long time the locals are accustomed to them frequenting the roads and as such give them due respect, which makes enjoying some of the fantastic cycling in Mallorca even more enjoyable. Here are some of the standout rides that Mallorca has to offer!

Cap de Formentor
Stats: 17km at 2.8%
From Pollenca this climb is more of a series of kickers than one long climb, however gradients remain mostly low making it a steady ride with spectacular views up to the iconic lighthouse. It is the Northernmost point of the island and is known as ‘the meeting point of the winds’ and the wind can indeed get quite strong at the top.

Col de Soller
Stats: North 7.4km at 6%, South 5km at 5%
The Southern side of Col de Soller from Bunyola is the most popular and easier side to climb with a gentle and consistent gradient owing to the many hairpins, no longer the main road to Soller since a tunnel was built in the 1990s the road is usually empty of cars barring a few.

The Northern side of the climb is slightly harder although still not hugely challenging once again thanks to numerous hairpins of which there are more than Alpe d’Huez!

Puig Major
Stats: 14km at 5.9%
The only thing which could make this climb challenging is its length. Highest climb in Mallorca, located within the Tramuntana mountains and as such is largely sheltered within woodlands.

Off The Beaten Track Riding in Mallorca

The next set of spots for cycling in Mallorca are a bit more off the beaten track than the previous ones but are still worth the ride.

Valldemossa
Stats: 5km at 7%
If you want to take the road less pedalled whilst still experiencing what’s best about Mallorca then Valldemossa is the place to go. Steeper than the majority of other climbs but also much quieter so in our opinion it’s worth it!

Tramuntana Coastal Road
Through the Tramuntana mountains along the Southern coastline from the town of Esporles to Andratx is the rolling route of the Tramuntana coastal road. As you ride along this road the Mediterranean sea is visible on your right and the Galatzo peak is on your let making for stunning views. The road surface is high-quality and there is very little traffic making this one of the most enjoyable routes on the island.

Els Vergers/Sobremunt
Stats: 7km at 10%
Crowned by the GCN show as the ‘hardest climb on the island’ this rough stretch of road ramps up to a maximum gradient of 25% and averages 10% – with downhill sections included. At the top is a restaurant which gives the climb it’s name and is well off the regular cyclist trail.

We believe that a huge part of taking a cycling vacation is discovering a new culture, cuisine, architecture and unique character of each place. So many European destinations are steeped in history just waiting to be discovered and Mallorca is no exception and there are lots of spots worth visiting whilst there. 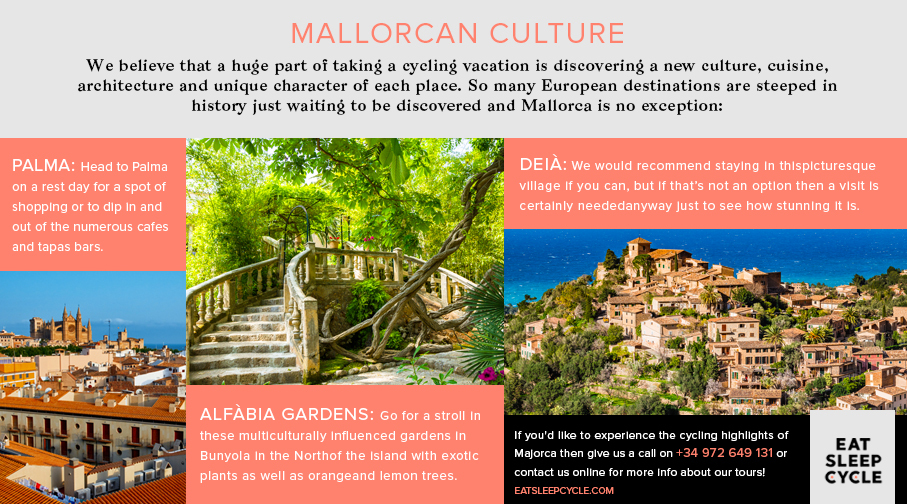 To go with the Mallorcan culture there is also the Mallocan cuisine which has to be tasted to be believed. There are a number of Michelin Star restaurants dotted around the island, a sign of the refined palettes that frequent the island and worth visiting if you can.

Where To Stay in Mallorca

Most cyclist visitors to Mallorca stay in the North of the island, far removed from cities like Magaluf to the South which are renowned more for partying than pedalling. In the North Port de Pollença and Alcudia are most popular as these areas are on the coast and close to the UNESCO World Heritage site Tramuntana Mountains – the highest point of which is the tip of Puig Major. The versatility of flat riding along the coast and the challenge of the  mountains are what makes the area attractive.

Hotels:
The number of cyclists that visit the island each year (in the hundreds of thousands) means that most hotels are bike friendly with many offering places to store bikes.

In the Cycling Hub:
If you want to be around more cyclists than just regular tourists then the cycling hub of Hotel Hoposa Bahía in Pollenca should be considered.

For Something Different:
And for those of you who would like something a little bit different you should check out Hotel Des Puig in Deia. 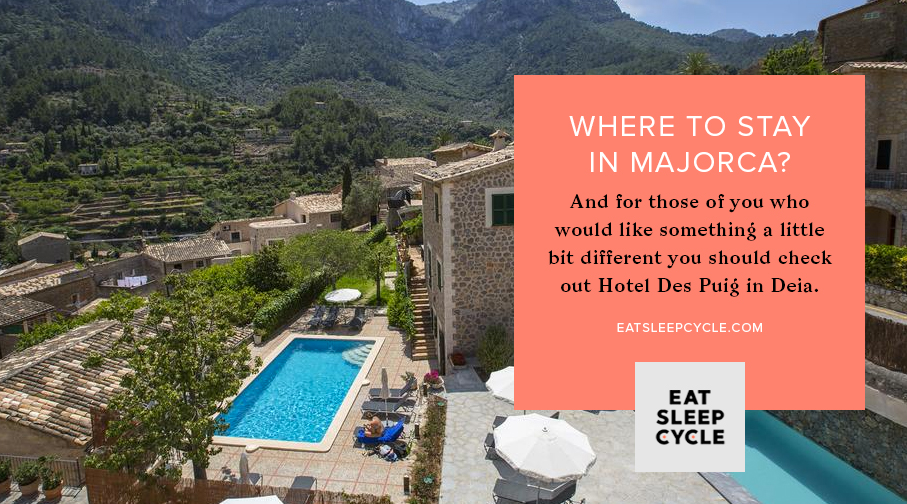 When (and how) to Travel to Mallorca

The best times to visit the island are spring and autumn when the weather is not too hot but is warm enough to get those cyclist tan-lines going! You can fly into Palma airport – the island’ capital of Palma hosts the island’s main airport. You can also get a ferry from mainland Spain (although beware that this could take up to 8 hours).

If the above has piqued your interest for a trip to one of the de facto cycling Meccas of Europe then we’ve got the perfect tour for you. Check out our Majorca Experience to really discover the island or take a look at our Mallorca Ride Camp to rack up those quality miles. If interested give us a call now on +34 972 649 131 or contact us online and we’ll be happy to give you more info about it!