The Drama and Excitement of the Spring Classics Cycling Season 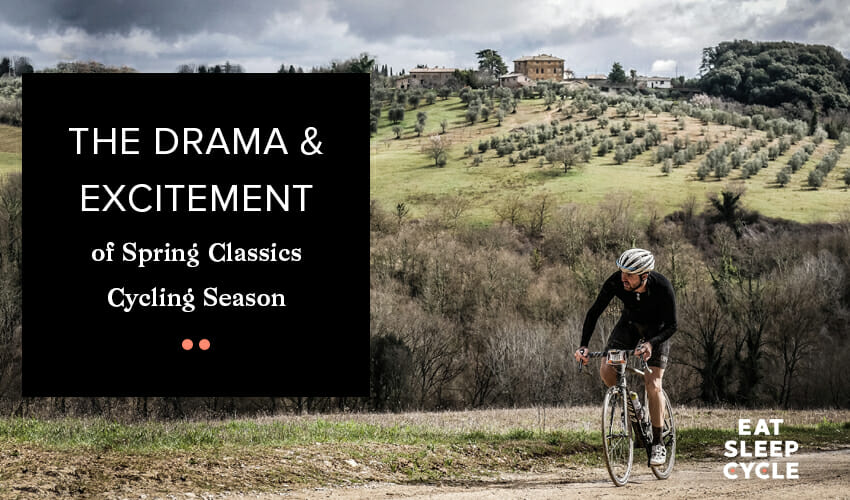 As the winter comes to an end, before fingers and toes have fully thawed out and with the season crescendo of the Tour de France still months away, come the Spring Classics. Often considered the ‘true’ cycling fan’s favourite races these prestigious one-day events are synonymous with cobbles and chaos. Such is the nature of one day races that riders give their all, more likely to attack and take risks making them truly exhilarating viewing. Indeed, many riders, so-called ‘classics specialists’, focus their seasons around these races, often those who hail from the areas where the races take place.

Defining “The Classics” of Cycling

Held throughout northern Europe ‘The Classics’ is a loose term often applied to the most prestigious of these races, also known as ‘Monuments’. As the races mainly take place in Belgium and Northern France their history is entangled with that of the First and Second World Wars and the courses often negotiate terrain where battles took place. There is, in fact, no official definition of what a ‘classic’ is, but we want to focus on the races that we at Eat Sleep Cycle think are the most exciting. 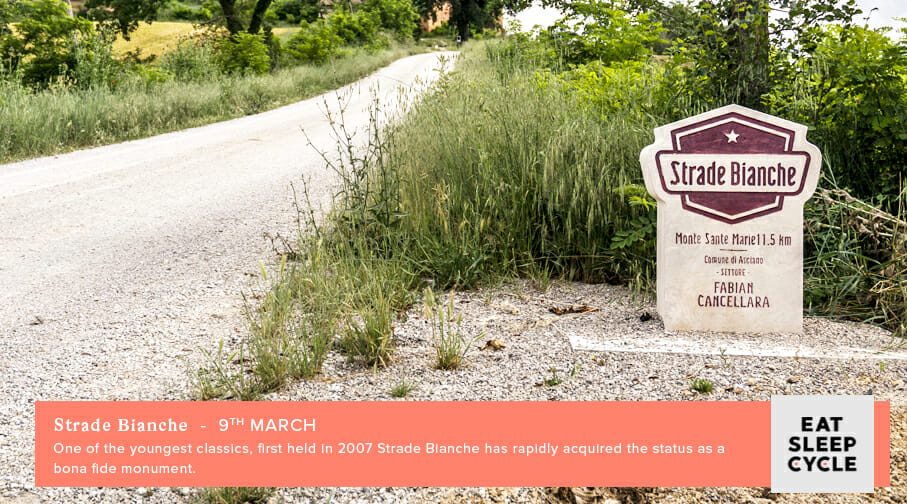 One of the youngest classics, first held in 2007 Strade Bianche has rapidly acquired the status of a bona fide monument. In part due to the eponymous white gravel roads which give the race its unique character. More than 50km of the race takes place off-road and the growing popularity of gravel riding only compounds the appeal of this early-season race.

The Strade Bianche traverses 176km over the hilly terrain of southern Tuscany. It starts and finishes in the UNESCO World Heritage site and medieval city of Siena and covers 9 sectors of gravel roads. The race culminates on the extremely steep and narrow Via Santa Caterina climb before finishing on the Piazza del Campo in the centre of Siena. Since 2015 a women’s Strade Bianche has been held on the same day as the men’s race over approximately half the distance won in 2018 by Dutch rider Anna van der Breggen.

Strade Bianche Gravel Sectors:
La Piana – this is sector four in the race and is 5.5km long and has been included since the first edition.
Asciano – sector 8/11, consisting of 11km is the hardest sector of the race as it is mostly uphill with some steep gradients. 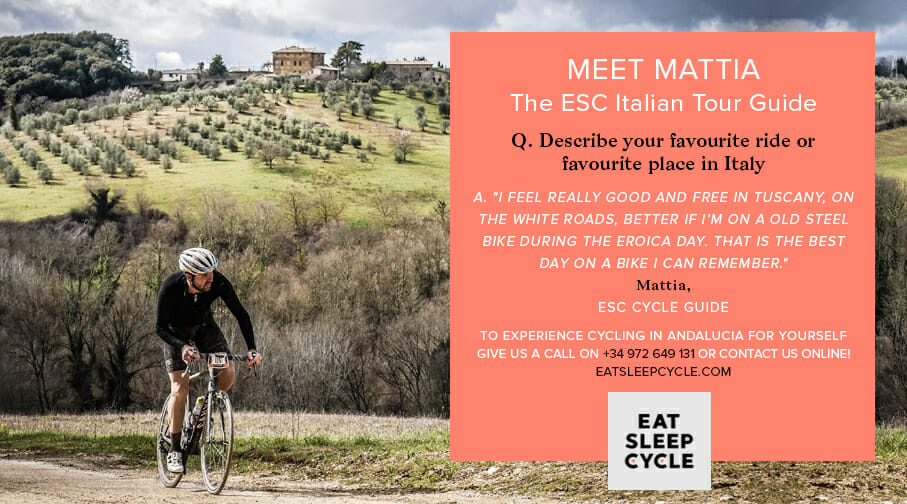 If you’re going take on the Strade Bianche then you’re going to need a tour guide who knows the route, speaks the language and can handle a bike like no other. Regazzi, the ESC team are delighted to introduce you to Mattia, our main man in the saddle in Italy!

What is your name?
My name is Mattia Bettagno

Where are you from?
I’m from Varese, Lombardia. Land of cycling, mountains and lakes!

Where do you live?
I live in Cuasso al monte, a small town on the little mountains just outside Varese.

What drew you to cycling and why?
When I was 8 my dad bought me a road bike and I never stopped riding! I raced since then until U23 category.

What is your favourite thing about guiding?
Guiding is discovering! It’s beautiful to show other people the places I love – priceless!

Describe your favourite ride or favourite place in Italy?
I feel really good and free in Tuscany, on the white roads, better if I’m on a old steel bike during the Eroica day. That is the best day on a bike I can remember.

What do you like to do when you’re not on a tour?
Riding! I like to ride any kind of bike. Mountain bike is a big part of my days off. The mountains where I live are amazing so it’s not hard to get out and enjoy my days.

What’s the best meal you’ve enjoyed in in Italy?
It’s hard to say ! Every place has different specialties.. I have a passion for the cakes during my rides so I know quite well where to get a good snack..Off the bike I’d say: Pizzoccheri if I’m in Bormio, Trippa if I’m in Siena. 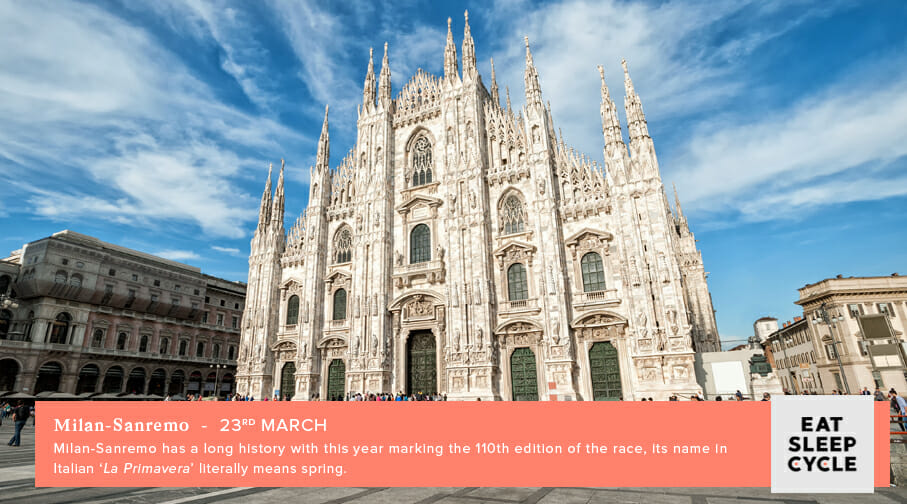 Milan-Sanremo has a long history with this year marking the 110th edition of the race, its name in Italian ‘La Primavera’ literally means spring. Run along an epic course it is the longest one-day race on the professional calendar. As the name suggests, the course traverses around 300km in north-western Italy from the city of Milan to the coastal city of San-Remo.

Although it is considered one for the sprinters due to its relatively flat course there are still plenty of climbs to catch the bigger or less prepared riders out. The race has been taken on many occasions by a well-timed attack from a non-sprinter in the closing kilometres, which is indeed how most recent winner Vincenzo Nibali sealed the deal.

Key Climbs of Milan-Sanremo
Passo del Turchino: In the past this was the only major climb in the race it is the first climb and the highest point of the race, 13.2km long and not particularly challenging averaging 1.5%.
Cipressa: ordinarily 6 km at 3.9% would not prove too challenging, however after 260km of racing this can be a decisive climb.
Poggio: The climb itself is not remarkable but is often the springboard for attacks from climbers looking to outfox the sprinter’s teams thanks to its proximity to the finish making it an exciting point in the race. 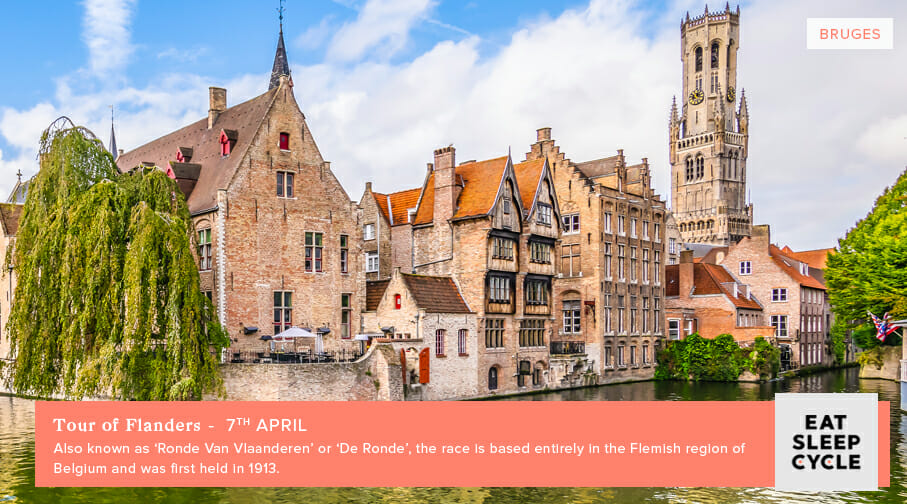 Also known as ‘Ronde Van Vlaanderen’ or ‘De Ronde’, the race is based entirely in the Flemish region of Belgium and was first held in 1913. The Tour of Flanders is the only classic to have been held on German-occupied territory during the Second World War and in full agreement with the German command.

Usually held one week prior to the pinnacle of the ‘cobbled classics’: Paris-Roubaix, Flanders is also characterised by cobblestones and the chaos that they cause. The race starts in Bruges in north-west Flanders before heading south through the flatlands and on to the hillier Ardennes – the climbs are short, steep and mostly cobbled.

Key Climbs of Ronde Van Vlaanderen
The longest climb is the Oude Kwaremont at 2.2km which although not the steepest it is considered the most challenging due to its length and cobbled surface.
The Oude Kwaremont is trumped only by the Koppenberg which while only 600m in length, features sections over 22% and is on a rough surfaced narrow road.

Ronde Van Vlaanderen Trivia
A women’s edition of the race has been held since 2004 with Anna van der Breggen taking the win.
The record for the most number of victories (three) is shared between Belgians Achiel Buysse, Eric Leman, Johan Museeuw and Tom Boonen, Italian Fiorenzo Magni and Swiss Fabian Cancellara. 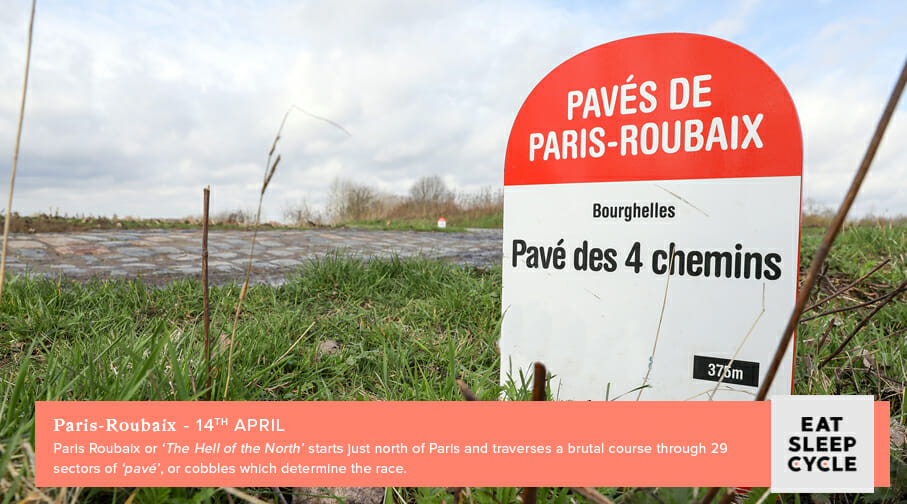 Paris Roubaix or ‘The Hell of the North’ starts just north of Paris and traverses a brutal course through 29 sectors of ‘pavé’, or cobbles which determine the race. Paris-Roubaix also features a unique finish as riders enter the Roubaix velodrome and ride one lap before crossing the line. Widely considered the pinnacle of the cobbled classics season the race usually garners plenty of excitement from fans and riders alike. Such is the nature of Paris-Roubaix that the course has inspired the creation of specialist bikes and equipment designed exclusively for tackling the torturous course.  Each year, the winner of the race receives a cobblestone as part of the prize.

Key Sectors of The Hell of the North
Trouée d’Arenberg or ‘Trench of Arenberg’: A 2.4km long section of pavé and one of the most difficult sections of the race, it crosses the Forest of Arenberg and is known as one of the roughest cobbled sectors in the race owing to lack of maintenance and fans removing cobbles as souvenirs.
Carrefour de l’Arbre: A 2.1km sector just 15km from the finish making a decisive points in the race. Like the Trench of Arenberg it is considered one of the hardest sectors due to the rough nature of the cobbles.

First held in 1892 Liège is the oldest of the ‘Monuments’, nicknamed ‘La Doyenne’ or ‘the Old Lady’ as a result. The event was cancelled during WWI but resumed in 1919 and had some brief interruptions during WWII. The race is the last of the three spring classics races held in the Ardennes region and is typically around 250 km in length. As depicted by the name, the race starts in Liège before heading to Bastogne and back. The myriad steep climbs and challenging course make Liège a true war of attrition providing an exciting race with plenty of attacks. The course changes year-on-year and climbs are added and removed with each edition of the race.

Since 2017 a women’s Liège-Bastogne-Liège has been held over roughly 130km sharing the final 45km with the men’s course, both editions so far have been won by the dominant Dutch rider Anna van der Breggen (intersted in women’s only tours? Then check out our selection of women’s only cycling tours!

Key climbs:
Côte de La Redoute 1.6km at 9.5% with a maximum gradient of 22% it has recently lost its status as a decisive point in the race but it still proves a challenge.
Côte de Saint-Nicolas the last categorised climb of the race and often proves very decisive, it is 1.4km long at an average gradient of 7.6%. 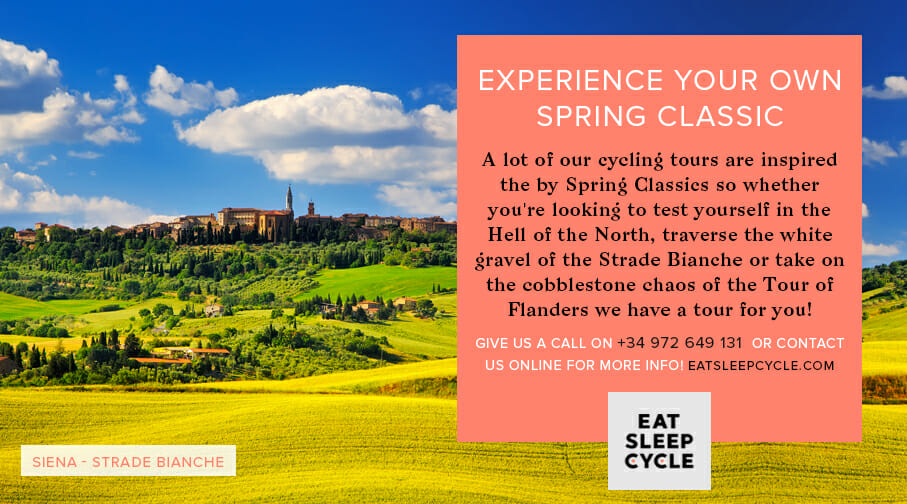 Experience Your Own Spring Classic

A lot of our cycling tours are inspired the by Spring Classics so whether you’re looking to test yourself in the Hell of the North, traverse the white gravel of the Strade Bianche or take on the cobblestone chaos of the Tour of Flanders we have a tour for you! Give us a call on +34 972 649 131 or contact us online for more info!