Cycling in Andalucia – Experiencing Is Believing 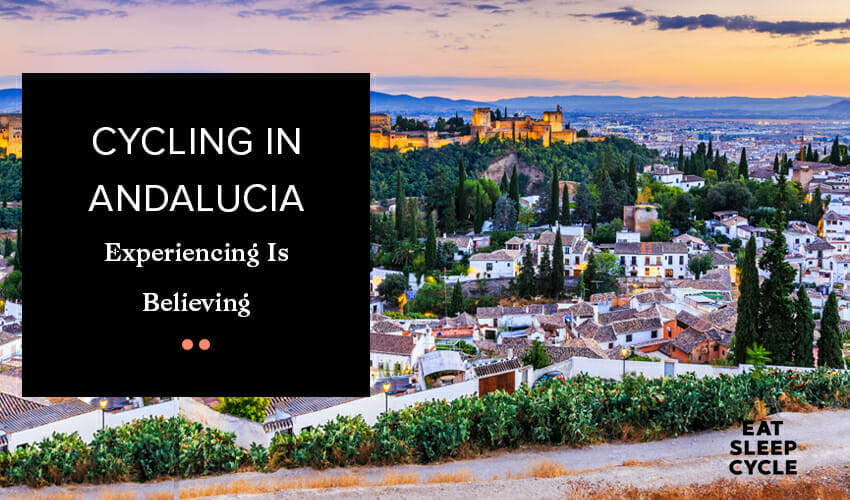 Andalucia is a region which captures the very essence of Spain. With a rich, long & often bloody history the architecture & landscapes are punctuated with Moorish & Christian sites. The Alhambra palace in Granada, the Alcazar Castle in Seville & Còrdoba’s Mezquita Mosque-Cathedral are three iconic landmarks which alone make a visit to the region worthwhile. Add in flamenco culture, wine, sherry & olive oil making and Andalucia offers an intoxicating experience – and that’s without the incredible Andalucian cycling experience.

Here we attempt to capture the essence of Andalucia: the views, the climbs, the warmth, the relaxed way of life and the wonderfully welcoming locals but to fully appreciate it has to be experienced!

Located in the south of Spain Andalucia is made up of 8 provinces – Cadiz, Almeria, Malaga & Granada bordering the south coast & Huelva, Seville, Còrdoba & Jaen inland. Within these provinces are numerous protected reserves, including the Sierra Nevada, Cabo de Gata & the Montes de Málaga. In other words, numerous playgrounds for cyclists. If the snow-capped peaks of the Sierra Nevada (which includes the highest paved road in Europe, the Pico de Veleta) aren’t enough to tempt you, now factor in the Costa del Sol, Costa Tropical, Costa de la Luz & Costa Almeria. 50% of Andalucia borders with the Mediterranean sea – cue delicious seafood, long white beaches and winter sun-seekers (Andalucia boasts more than 325 days of sun a year and is an ideal spot for a European winter cycling holiday!). 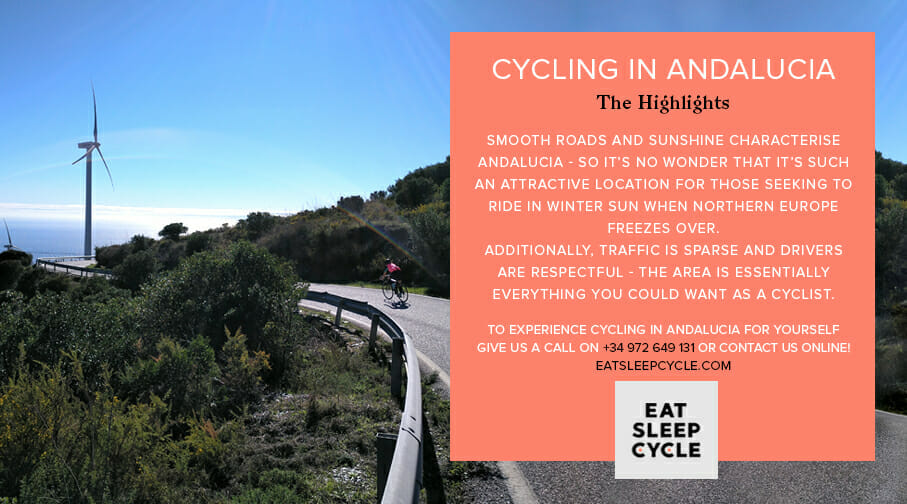 Cycling in Andalucia: The Highlights

Smooth roads and sunshine characterise Andalucia – so it’s no wonder that it’s such an attractive location for those seeking to ride in winter sun when Northern Europe freezes over. Additionally, traffic is sparse and drivers are respectful – the area is essentially everything you could want as a cyclist.

Carretera del Cabra: The Goat’s Path is a must-see climb for any cyclist visiting the area. Just to the west of the Sierra Nevada mountains the road was built to connect Granada to the fishing boats on the coast in the village of Almuñuecar. The pass is 17 km long and maxes out at a gradient of 11% and boasts captivating views of the mediterranean.

Puerto del León: Rising from the city of Malaga over 16 kms to 940 m altitude the Puerto del León features steady gradients which average 5.5% and, you guessed it, picturesque views in all directions. A regular feature of local club runs out of Malaga the climb also featured in the Vuelta España in 2015 when Peter Sagan won the stage.

Caminito del Rey: The 2015 Vuelta was the first road race to visit the ‘Pathway of the King’. Short and sweet is the best way to describe this 4 km climb. With ramps of up to 15% legs are likely to sting as the road winds its way up to a restaurant and a dead end.

Puerto de La Ragua: A pass in the Sierra Nevada mountains this is a challenging ascent when climbed from the south. At 25 km long the pass takes the rider to over 2,000 m altitude and boasts a comforting maximum gradient of 8%.

Torcal de Antequera: 10.5 kms takes the cyclist to 1,200 m elevation at a decent average gradient of 7.6 % with great views pretty much all the way up. At the top take in the beautiful rock formations which give the climb its name.

Pico de Veleta: No post on cycling in Andalucia would be complete without featuring the mighty Pico de Veleta. Veleta means ‘weather vane’ and the weather is main difficulty for the cyclist to overcome to make it to the top. Up to 2,500 m (29 km into the climb) the road is in excellent condition. From the notorious ‘barrier’ the cyclists rides beyond civilisation along a poorly surfaced road. The last 200 m (if you’re lucky enough to make it that far) are not passable on a road bike and must be walked. Often scorching hot in the valley and freezing cold at the top it’s worth waiting for perfect conditions before attempting the 40 km climb.

Like many areas in Spain, Andalucía has its own selection of local delicacies that are to die for. Being situated in the south and catching almost year-round sun means that the area is known for growing plenty of fruit and vegetables, in particular olives, avocados, oranges and raisins (which we used to fuel our rides on our most recent visit)!

Of course, the classic Spanish dish of Paella is a must, and being so close to the sea means delicious fresh fish! Other fishy offerings include pescaito frito (literally, fried fish), a local speciality. Jamon will likewise need to be sampled, air-cured in the mountains these wafer thin slices of ham will melt in your mouth! 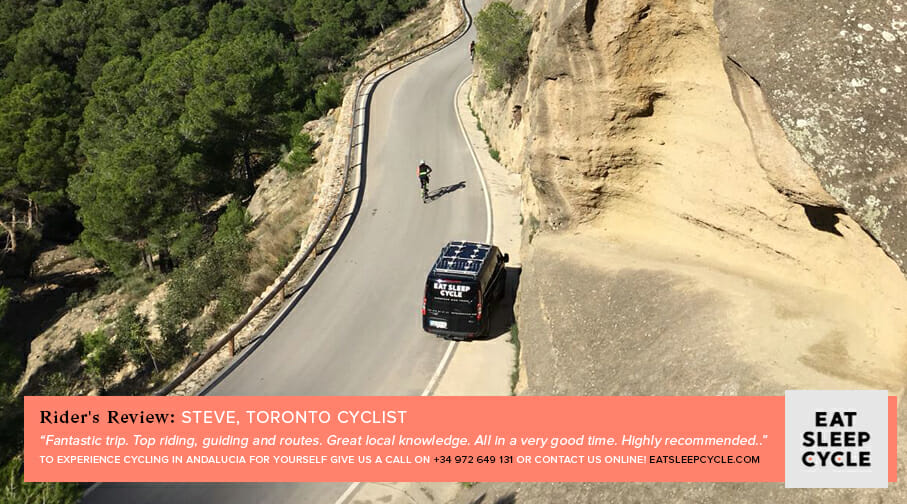 From the Rider’s Mouth: Steve’s Review

We spoke to Luis, olive oil & winemaker & our local guide for our Andalucia tours. Luis is the expert on Andalucia culture, food and roads and we asked him what makes him tick:

What is your name?
Luis Duritz

Where are you from?
From Cordoba, Andalucía! I was raised in Sevilla studied at the University in Granada, I lived in Málaga for 8 years and now I’m back home in Córdoba and sharing a house with friends in Granada.

Where do you live?
Part of the year in Granada, and the most of the time in Guadalmoral, my mother`s farm, near Córdoba.

How long have you lived there?
The last five years.

What drew you to cycling and why?
Watching the final kilometres of stage 16 of the 1990 Tour de France when Miguel Indurain and Greg LeMond battled up the Luz Ardiden! I was inspired also because on the same stage Andaluz rider Miguel Ángel Martínez Torres came third at 59” back to such giants of the sport!

What is your favourite thing about guiding?
Everything that happens from when I wake up till I go to sleep. To deal with unexpected situations. 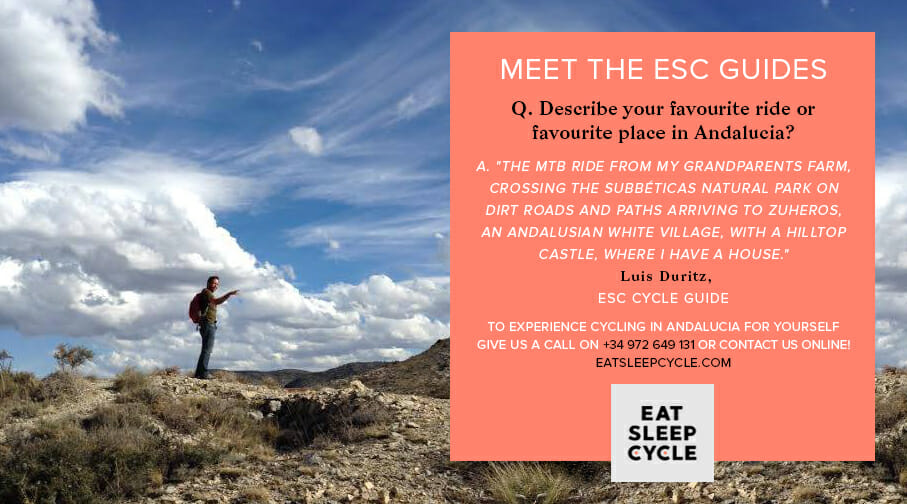 Describe your favourite ride or favourite place in Andalucia…
The MTB ride from my grandparents farm, crossing the Subbéticas Natural Park on dirt roads and paths arriving to Zuheros, an Andalusian white village, with a hilltop castle, where I have a house.

What do you like to do when you’re not on a tour?
Off season, everyday is different, but my perfect day is: to wake up in the farm, have a good coffee, take a walk along the vineyard, the olive orchard and the creek, do some physical work and finish the day in the city, having a glass of natural wine in @quierojugovivo, in Córdoba.

What’s the best meal you’ve enjoyed in in Andalucia?
Only one!? Impossible… but to mention two that I had working with ESC: the grilled sardines in a picnic in Lújar (Granada), seeing the Mediterranean sea from the hills, and a veggie menu in @restaurantelaboca with a spinach and pea stew to die for.

Take Me There! How to get to Andalucia

Malaga airport is the fourth biggest in Spain and is easily accessible from most of Europe, (flights from other parts of the world are likely to require transfers at Madrid or another major connecting airport). Transport to and from the airport is easily accessible and within a 90 min transfer of most of the most popular cycling locations. Almeria Airport is also an option for those looking to explore the eastern Sierra Nevada.

It is also possible to arrive by train from other parts of Spain and even Europe. Other parts of the Southern region of Spain are easily accessible by car or transport so you could take advantage of your location and explore other areas whilst there. (like the Calpe ride camp).

Join the Ride – Cycle in Andalucia

If you like what you’ve read and want to experience cycling in Andalucia for yourself check out our 3 Andaluz itineraires: 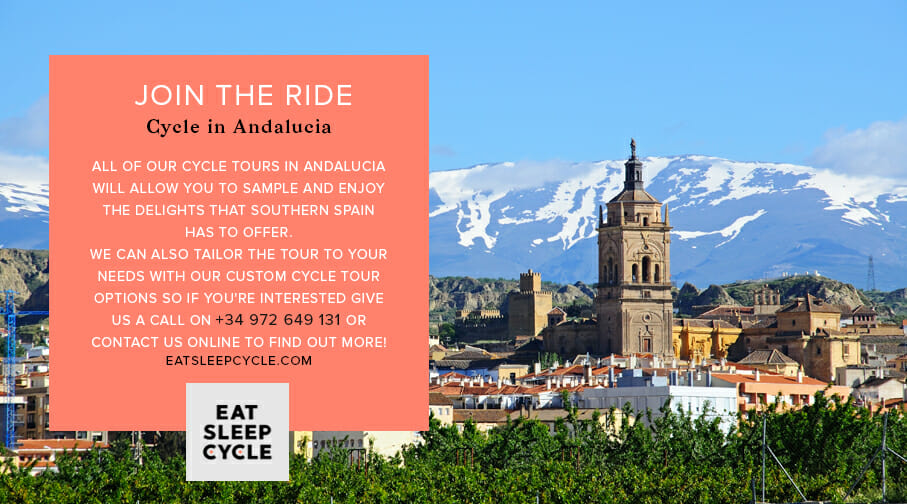 All of our cycle tours in Andalucia will allow you to sample and enjoy the delights that Southern Spain has to offer. We can also tailor the tour to your needs with our custom cycle tour options so if you’re interested give us a call on +34 972 649 131 or contact us online to find out more!